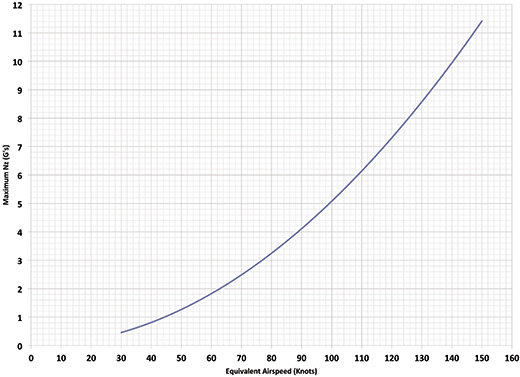 As we can see from the curve, the margin above this minimum 1.0 load factor increases relatively rapidly with increasing airspeed. At about 63 knots, the airplane can pull 2 G, which means it could sustain a 60° banked turn without stalling. By the time the airspeed reaches 120 knots (the legal maximum cruise for a Light Sport airplane), the wing is capable of generating enough lift to pull 7 G.

In practical terms, this means the airplane will have a maneuvering speed well below this theoretical cruise speed, even if the structure is designed to the FAA aerobatic category maximum limit load of 6 G. It’s important to be aware of how much load the airplane can generate aerodynamically, particularly when flying clean airplanes with relatively low wing loadings. As we can see from our example, such an airplane can generate enough lift to break the structure at a relatively low speed. Our example airplane would have a maneuvering speed of 109 knots.

The Physics of Turns

Another area where the load-factor margin becomes important is in turning flight, particularly at low airspeed near the ground, such as is the case in the traffic pattern.

The velocity of an object is a vector quantity. It has both a magnitude and a direction. Acceleration is a change in velocity and can be a change in either or both the direction and the magnitude of the velocity. A turning airplane is continuously accelerating toward the center of the turn, even though its speed, which is the magnitude of the velocity, is constant. Newton tells us that a force must act on a mass to cause acceleration. In a turning airplane, this force is the lift of the wings. By banking the airplane, the pilot causes some of the lift to act horizontally. It is this component of the lift that curves the flight path in the direction of the bank. 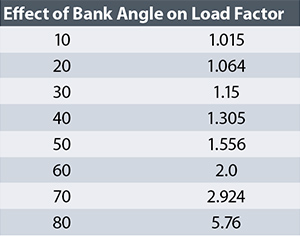 This phenomenon is a key ingredient in the classic stall/spin on the base-to-final-turn scenario. To increase load factor, the lift generated by the wing must increase. The pilot does this by pulling back on the stick and increasing the angle of attack of the airplane. As we have just seen, the amount of extra lift required by a given bank-angle increase is much larger if the airplane is already in a steep bank than it would be in a more gentle turn. This may catch the pilot by surprise if he is used to shallower turns. At the low airspeed typical in the pattern, the wing cannot develop enough lift to maintain the required load factor and will stall as the pilot attempts to increase lift by pulling.

Figure 2 shows the load-factor margin of our example airplane as a function of bank angle at several airspeeds. 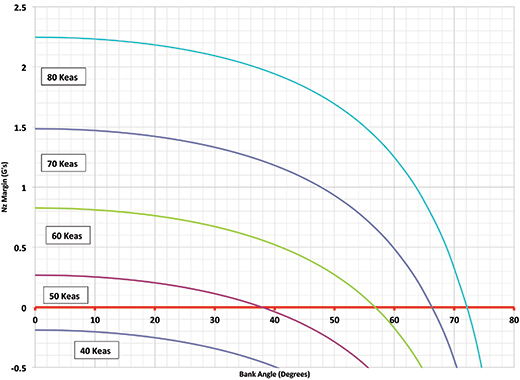 Notice first how rapidly all of the curves fall off as bank angle increases. For example, if we look at the curve for 70 knots, which would be a typical traffic-pattern airspeed for this airplane, the airplane has a load-factor margin of about 1.5 G, wings level. Increasing the bank angle to 30° only reduces this margin to slightly above 1.3. This means that in a 30° banked turn at 70 knots, this airplane still has a significant amount of excess lift available to tighten the turn, or pull up. The pilot can increase the bank angle significantly from the initial 30° without stalling the airplane.

If we now increase bank angle to 60°, the picture changes dramatically. The load-factor margin falls to 0.5 G. The wing is generating most of the lift it can, and the pilot can only ask for another half G of load factor before the airplane stalls. Most importantly, the G margin goes to zero at about 66° of bank. This means that in a 60° banked turn, the airplane will stall if the pilot increases bank by only 6° and pulls to try to maintain constant airspeed.

Understanding this rapid loss of lift margin with increasing bank angle is important for safe flying in the traffic pattern. A pilot who normally makes traffic-pattern turns at moderate bank angles (around 30°) is used to being able to adjust the radius of the base to final turn, to line up with the runway by varying bank angle significantly around the initial bank used to establish the turn. If the pilot overshoots the initial turn and establishes a steeper banked turn to compensate, there is very little additional margin left. The ability to further tighten the turn with what seems to be a moderate bank-angle increase is gone; attempting to do so will stall the airplane. As the curves in Figure 2 show, this loss in margin to increase bank angle happens quickly as the basic bank angle exceeds about 45°.

FAR Part 23 designates the approach reference airspeed as not less than 1.3 times the level-flight 1-G stall speed. At this airspeed, an airplane is capable of generating a maximum load factor of 1.69, so it will have 0.69-G load-factor margin in level flight. In a 30° bank, it will have just over 0.5-G margin, and in a 45° bank, the margin will fall to 0.25 G. At the FAR 23-designated approach speed, the airplane cannot be trimmed in a 60° bank without stalling.

Kitplanes - October 20, 2007
0
Home equity loans, building loans, credit cards: These are only a few of the ways that one can finance an airplane building project. But beware: Each option has its benefits and disadvantages, and the wise builder will consider these carefully before signing on the dotted line; by Dave Higdon.

Dave Martin - January 17, 2012
3
Dave Martin explains the different designations of factory-built and Experimental Light Sport Aircraft and how they continue to evolve.