Recently I received an email from a KITPLANES reader, who had read about a new superalloy metal that promised to be lighter and stronger than the aluminum alloys we currently use in our airplanes. He understood that this new material would be too expensive for homebuilders for the foreseeable future, but it prompted him to ask the following question: How much good does saving weight on an airplane really do? 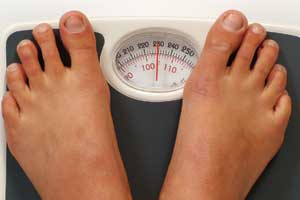 Weight growth isn’t a problem only for humans. Aircraft designs can be afflicted by unexpected avoirdupois.

Weight is the enemy of performance. It is very easy to add weight to an airplane, but it is much harder to get it out. Runaway weight growth has hurt many airplanes, and the rate of weight growth once the process has started is surprisingly high. A good airplane structure is strong enough to carry all of the loads it must, but no heavier than is necessary. The same approach applies throughout the airplane. The systems, avionics (and anything else that has mass) should be sized to properly perform their functions, but kept as light as possible. This is especially true of items that do not directly add performance or help the airplane function, such as paint and the interior appointments.

When laying out the initial design, the designer would do well to leave some performance margin to allow for the inevitable increases in weight that will come later. This weight growth happens in many ways.

No matter how hard the designer tries to be accurate in the initial weight estimates, airplanes tend to be heavier than anticipated. This is particularly true if we try to do a bottom-up weight estimate by adding up the weights of all of the known components of the airplane. It is difficult to take everything into account, and the estimates of the individual component weights tend to be optimistic. It is easy, for example, to get the weight of major components such as the engine, avionics and seats correct, but leave out the installation weights of items such as racks and mounts and their attendant fasteners. In preliminary design it is best to use experience-based weight estimating techniques based on correlations with actual weights from real, flying airplanes. It is also a good idea to do sanity checks by comparing your estimated weights to the weights of in-service airplanes. If there is a big difference between your estimate and the actual weight of a flying airplane doing the same mission, you probably have a problem.

Even if the initial weight estimate is right on, airplanes are like people; as they age, they get heavier. This is true both for individual machines and the type in general. Early versions of an airplane tend to have relatively spartan appointments. Usually, only basic equipment and a simple interior are installed. For light airplanes, it is likely that a prototype will have VFR instrumentation only and minimal avionics. As time goes on, people add things to the airplane. The interior gets refitted with more comfortable (and heavier) seats and better-looking (and heavier) side paneling, headliners and instrument-panel facing. A prettier (and heavier) finish is applied, and so on. Each of these changes is small by itself, but cumulatively they can add up to a lot of extra weight.

Airplanes also get heavier as people try to increase their capabilities. If the airplane is fast enough for cross-country work, additional baggage capacity and avionics become desirable. Increases in fuel capacity to stretch range are likely. In the homebuilt world, no matter how much power the prototype has, someone will always find a reason to mount a bigger, more powerful (but heavier and thirstier) engine.

The designer should take this inevitable weight growth into account in the initial design. Two areas are of particular concern. The first is structural strength. Even though it costs a little weight up front, it is a good idea to stress the major load-bearing elements of the structure to withstand some weight growth. The normal approach to this is to set the initial limit load factor higher than the minimum that would be acceptable for safety. As the airplane gets heavier, its limit load factor will drop, but if there is some initial padding, it will remain safe.

The second area where the designer should leave some margin is wing size. If the initial airplane has a wing that is optimally sized for the anticipated weight of the prototype, the later (heavier) versions of the airplane will be under-winged and will suffer in terms of stall speed, climb and overall performance. The penalty for having a slightly oversize wing is small, but the price of too small a wing can be large. Transport designers understand this phenomenon and explicitly take it into account. The first model of any airliner will be over-winged for its weight. A few years down the line, someone will want a stretched, higher-capacity version of the airplane. If the wing is big enough to handle the extra weight, this is an easy and profitable change. If it is not, the business goes to another manufacturer who can provide the right machine for the job.

Weight growth can become a serious problem because if we add something to the airplane, the weight growth doesn’t stop with the added weight of the new thing we just put aboard. Adding a pound of additional dead weight to an airplane has a remarkably large effect on gross weight, because the rest of the airplane must change to accommodate the extra weight of the addition.

As the airplane gets heavier, the structure must be stronger to support it. The wing must grow to provide sufficient lift, and the landing gear gets heavier. Flying at a higher gross weight, the airplane burns more fuel per hour, so we must add additional fuel to keep the range constant. All of these factors that were necessitated by the original increase in weight add additional weight. Unfortunately, the airplane must change again to accommodate the new additional weight, which makes it even heavier. This weight growth is sometimes called wrap factor and is largely determined by the mission and configuration of the airplane. Its important to realize that the wrap factor can be large, causing the weight to grow a lot more than the weight of the item we initially put aboard the airplane.

To show how weight can grow, I did some analysis of a hypothetical example two-seat airplane. Initially our example airplane has the following characteristics:

Lets take a look at what happens if we start adding weight to the airplane. Suppose we have something we want to add to the airplane that adds weight. Well call it The Thing.

Figure 1 shows the effect of added weight on range: The weight of The Thing is plotted on the X-axis of the figure. The top curve shows the effect of putting weight aboard on range if we allow the gross weight of the airplane to grow, but we don’t change the airframe or the fuel load. As we add weight, the range suffers, but the reduction is not huge. Unfortunately, we cant usually do this, because the airplane has a gross weight limit, and putting additional weight aboard usually means we have a choices of leaving behind fuel, people or cargo. The lower curve in Figure 1 shows the effect of offloading fuel. As you can see, the range drops rapidly as we remove fuel to compensate for the weight of The Thing. 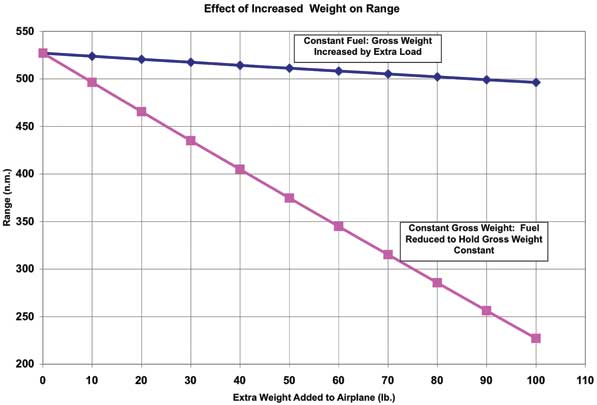 If we are dealing with an existing airplane, these are our only choices. If the airplane can be flown safely at higher weight, we can accept the penalties

in range, stall speed, rate of climb, etc. and soldier on. If not, then we must accept the reduced range we get when we sacrifice fuel to stay below the design gross weight.

Figure 2 shows the result of this process for our example airplane. The figure has three curves showing the weight of the additional fuel required to keep range constant, the additional wing required to keep stall speed constant and the sum of the two, which is the total amount of weight we must add to the airplane and fuel load to carry The Thing over the original mission. Notice how big this increment is. For example, if The Thing weighs 50 pounds, we must add about 7.5 pounds of fuel (a little over a gallon) and 15 pounds of wing to compensate, for a total of 22.5 pounds. When we add in the 50 pounds for The Thing itself, we find that the weight of the airplane at takeoff grew 72.5 pounds. 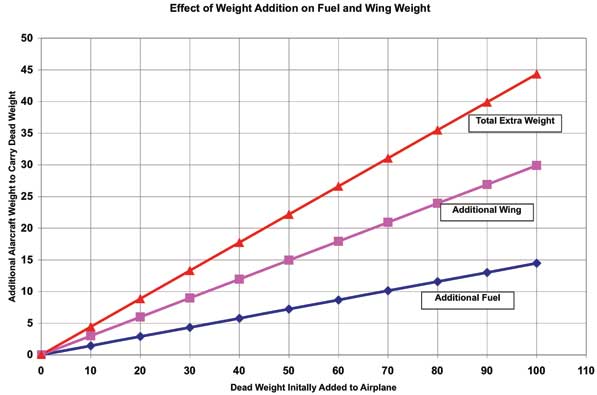 Even this isn’t the complete story. The analysis we just did doesn’t take into account that the landing gear has to handle extra weight, and will probably get heavier, and the takeoff distance and rate of climb will suffer. If we make adjustments to the engine size, landing-gear weight and similar items, and then readjust the fuel and wing to compensate, the weight spiral continues merrily upward. By the time we have really taken everything into account the weight of fuel, additional wing and other modifications needed can exceed the weight of The Thing by quite a bit. For conventional airplanes, adding The Thing typically increase gross weight by up to three times the weight of The Thing itself.

Vic Syracuse - November 15, 2019
7
Wherever a bolt is subject to rotation, it is required to have a castellated...