What is probably the most expensive sentence in airplane design or homebuilding starts with "What if we just…" It is remarkably easy to set out to design a simple, inexpensive machine and end up with a much more complex final product that takes much more time and money to produce than originally thought.

As a project progresses it is a natural impulse to want to improve performance or add capability to the machine. The designer or builder is continuously tempted to incorporate new systems, equipment or technology that looks like it will improve the performance or appeal of the airplane. This gradual addition of systems and capabilities is known as "feature creep," and it has been the downfall of many projects. It is a particular problem in the military airplane world, where each new machine is expected to offer a dramatic improvement in capability over the type it is being developed to replace.

In the certified airplane world, this impulse is somewhat constrained by the need to get a product to market on schedule, the cost of certification of every new feature and the need to keep the final sale price under control.

Homebuilders have no such restrictions. They are constrained only by their own ambitions, and in the end, the time and money they have to invest in their projects. The trap many fall into is that the features they add to their projects end up adding a lot of cost and build time to the project and yield little real improvement in the airplane. Sometimes the changes and additions can actually be detrimental and lead to a more expensive, less capable airplane that took longer to build. We’ll look at a few examples of feature creep and its consequences. 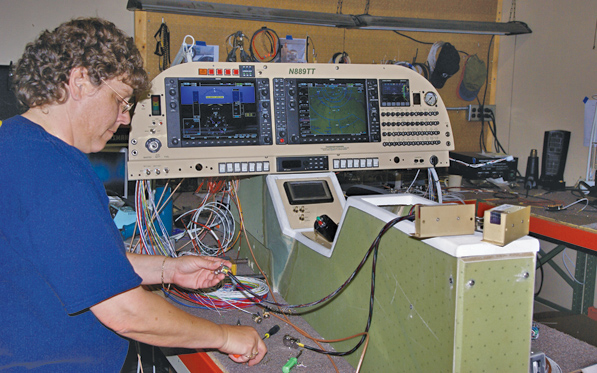 Do you really need all of this STUFF?

It is common for the prototype of an airplane to have a simple exterior finish and a relatively austere set of cabin appointments. But builders will often wish to make their airplanes more comfortable, and more visually appealing. They put a lot of effort into perfectly filling and fairing the exterior surfaces, and apply many coats of paint to get a perfect finish. While beautiful, this exterior finish likely weighs a good bit more than a basic paint job.

It is even easier to add weight in the interior. One culprit is treatment of cockpit walls and instrument panels with decorative or upholstered surfaces that make the interior look better and may provide some sound absorption. Unfortunately, even though these treatments do not weigh much per square foot, they may end up covering a lot of area and can become quite heavy. Seats and upholstery can also add considerable weight.

It is not uncommon to see an attractively finished and appointed airplane the weighs hundreds of pounds more that the factory ship. This extra weight hurts range and performance.

Retracting the landing gear is a well-proven way of reducing cruise drag and making the airplane faster. It is also a good way to make the airplane more expensive and heavier, and to increase the cost of insuring it.

There is also considerable cost in the mechanisms for retracting and extending the gear, and the builder will spend a lot of time installing and testing the whole landing gear system.

If we do an honest analysis of the performance gain achieved by retracting the gear, comparing it against the same airplane with a well-faired fixed gear, we find that in the speed range for most single-engine light airplanes, the cruise speed is improved by only a few knots, even if the gear doors seal perfectly when the gear is retracted. Unless the cruise speed is more than 200 knots, the speed gain for a good retractable gear will be in the single-digit range.

This analysis considered only drag, and didn’t take into account the additional weight, cost and complexity of the retractable. In view of this, retractable gear does not appear to pay off unless the airplane has very high performance. In recent years, we’ve seen acknowledgement of this in the production airplane world. Both the Cirrus SR-22 and the Cessna Corvalis (formerly Columbia 400) have fixed landing gear, even though they are significantly faster than many older retractable gear airplanes. Both designers concluded that the small gain from retractable gear was not worth the cost and weight. 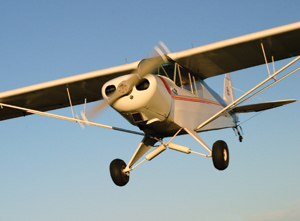 Sometimes the KISS principle is the best approach.

As the performance of an airplane increases, and it must fly over a larger speed range, it becomes increasingly difficult to design a fixed-pitch propeller that performs well at the high-speed cruise condition and still gives sufficient thrust for takeoff and climb. Every fixed-pitch prop is a compromise, and the faster the airplane is, the more one must compromise one portion of the flight envelope to make use of a fixed-pitch propeller. The compromise is helped somewhat by the fact that fast airplanes tend to have big engines and high power-to-weight ratios, so we can afford to give away a little climb potential to retain the cruise performance.

The technological cure for the problem of matching the propeller to varying flight conditions is a variable-pitch, or constant-speed prop. By varying the pitch of the blades, such a prop automatically adjusts to the flight condition, and allows the pilot to efficiently use all of the power available from the engine over the entire flight envelope. This will improve takeoff and climb performance, while still allowing the engine and prop to deliver the fullest high-speed performance possible.

The downsides of constant-speed propellers are cost and weight. A constant-speed prop is a complex and expensive piece of equipment that costs more to maintain, and if necessary repair, than a fixed-pitch unit. It also weighs more than its fixed-pitch counterpart. The decision to go constant-speed is much like the decision to retract the landing gear. It will improve performance, but at significant cost. Careful analysis of the real performance gain is a good idea before committing to the extra cost and weight.

Adding avionics is probably the quickest and easiest way to make an airplane heavier and more expensive. Some additional boxes provide needed capabilities for navigation or IFR operations, but some add little additional real capability and cost a lot of money. An example of this, in this writer’s somewhat curmudgeonly opinion, is the appearance of glass cockpits on some low-end LSA or sport airplanes. It’s easy to end up with an avionics package that costs as much as the basic VFR-equipped airplane. While such cockpits might be useful in an airplane used primarily to train pilots who will be moving up to a higher performance, glass-cockpit cross-country machine, for the average sport pilot, such a fancy panel adds a lot of cost for little real gain.

It’s tempting for a builder to modify an airplane to incorporate what appears to be the latest in technology to improve performance. Aerodynamic technologies are a particular culprit. It is common to see an airplane modified to use the latest "super airfoil" or tip devices such as winglets or other magic wingtips. Vortex generators are another aero technology that is getting a lot of attention recently. The unfortunate aspect about such modifications is that they often provide no gain, or may actually hurt the performance of the airplane. This is not true of all such modifications, and some address particular issues such as stall characteristics well. What is important is to have a clear understanding of what the aero technology under consideration will really do, and where in the flight envelope it can potentially help or hurt. This is particularly true for airfoil selection, as airfoils are designed for specific flight conditions. An airfoil that is good at one flight condition may be quite poor at another. Even though the advertised performance of a new "magic airfoil" may be true, the magic may not happen in your airplane’s flight condition.

It is natural to want to make your airplane the best it can be. Incorporating new features or technology can often look like the path to great things. But it is essential to see past the excitement of the apparent potential and take a hard, cold look at both the cost and benefit of each feature. Upon closer analysis, many will fail to buy their way into real gain at an acceptable cost.