The shape of the trailing edge of a flying surface—wing, tail, or control—determines how the air flowing departs downstream as it leaves the surface. Both the direction of this departing flow and the characteristics of the wake it forms are strongly affected by the shape of the trailing edge, and can have quite significant effects on the aerodynamic characteristics of the surface itself. 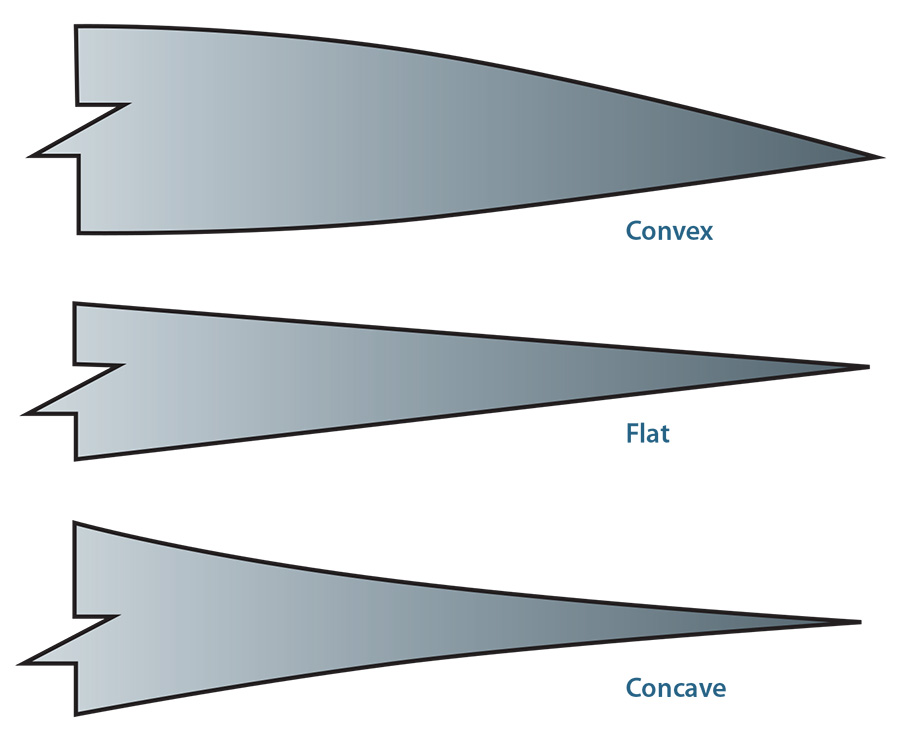 Designers employ various strategies in designing trailing edge shapes. All of them are a compromise between keeping the airflow attached until it can separate smoothly and building a shape that’s structurally sound.

A theoretically perfect trailing edge is sharp and has a zero included angle so that the upper surface flow and the lower surface flow leave the airfoil flowing aft and parallel. In reality we can’t build such an edge, so all training edges have some finite included angle between the surfaces. This wedge angle can have a large effect on the aerodynamic characteristics of the airfoil. As the wedge angle gets larger, flow separation upstream of the trailing edge becomes more likely. If the wedge angle gets too large, the airflow will separate forward of the trailing edge, increasing drag and reducing lift. Excessive wedge angle can also cause unstable or non-linear hinge moments on control surfaces.

The wedge angle of a low-speed airfoil trailing edge is a compromise between aerodynamics and structure. An ideal, perfectly thin trailing edge is physically impossible to build. The compromise for the airfoil designer is to make the wedge angle large enough so that the airfoil can be built strong enough without too much trouble, and at the same time keep the angle small enough to minimize the effects of separation.

This type of trailing edge works well aerodynamically but is still difficult to build and easy to damage. 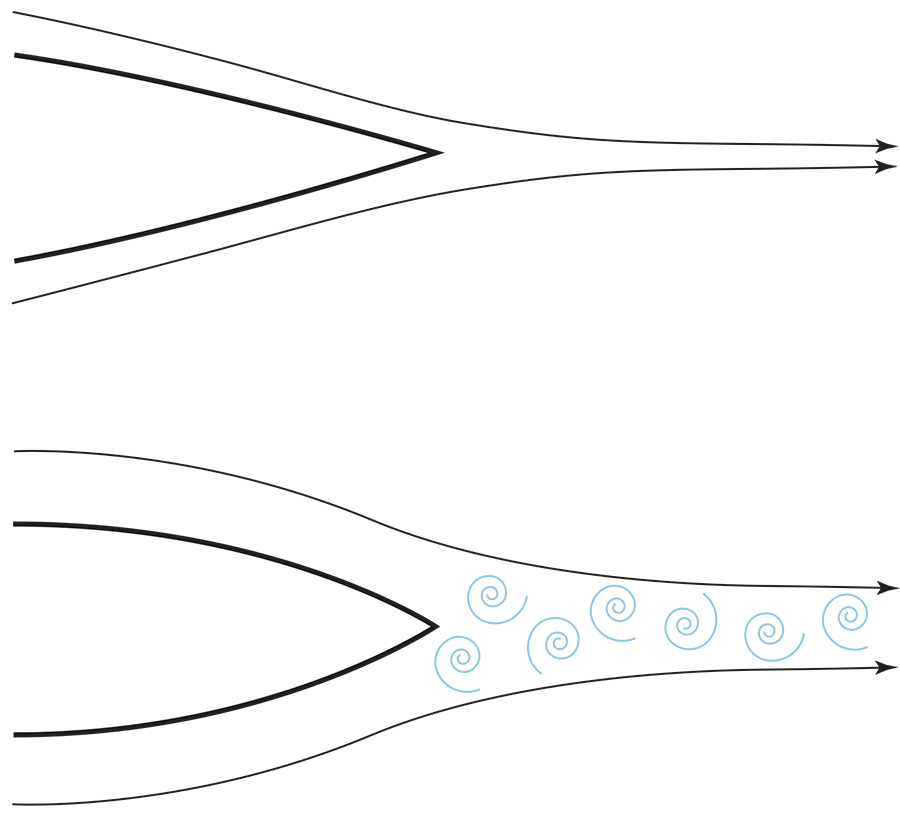 A chopped trailing edge has a large effect on the hinge moments of control surfaces. Because the separated zone near the trailing edge is eliminated, the aerodynamic effectiveness of the aft portion of the control surface is increased. This causes two effects. First, the control surface is crisper and more effective. Because the wake is filled in, the surface does not have to move as far to cause a change in lift. It will be more effective, particularly at small deflections. Many competition aerobatic airplanes exploit this effect to improve their performance in rolling and hesitation-rolling maneuvers.

The second effect of a square trailing edge is increased hinge moment. A surface with a square-cut trailing edge will feel heavier to the pilot. This effect can be used to cure control sensitivity. Adding small wedges, point forward, to both sides of a control surface, can give all or part of it a squared-off trailing edge, making the control feel heavier. The feel of the control can be tailored by altering the size of the wedges, and the amount of trailing-edge length they cover. If the total height of the pair of wedges is kept below 0.5% of the chord, they will produce little or no drag increase.

Sometimes, it seems structurally desirable to make a trailing edge round. It is, for example, easy to use a single tube as a trailing-edge spar.

Round trailing edges are undesirable because there is no clearly defined corner to cause the air to leave the airfoil and flow downstream. At positive angles of attack, the lower-surface flow tends to stay attached to the radius of the round trailing edge, and wrap around towards the upper surface. This has an effect similar to deflecting a flap upward. The air that has wrapped around the trailing edge eventually separates, but the direction it leaves the airfoil is different than it would have been if the airfoil had a sharp trailing edge. The airfoil with the round trailing edge loses some lift because it does not deflect the air down as much as the sharp-leading-edge airfoil.

The magnitude of this undesirable effect is determined by the radius of the round trailing edge. If the radius is small enough, the air will separate without wrapping around very much and the lift penalty will be small.

It is relatively common practice on metal airplanes to form trailing edges of bent sheet material. These bent-sheet trailing edges have a small radius at the bend that forms the trailing edge. This radius is a little larger than twice the material thickness of the skin, and is almost always too small to cause any detectable aerodynamic effect.

A more extreme example of round trailing edges can be found on some ultralights, which have aluminum-tube ladder wing structures. On some of these airplanes, the trailing edge can be more than an inch in diameter. At this point, the roundness of the trailing edge is probably hurting both lift and drag. For most ultralights, performance is not of prime importance. In such a situation, the simplicity and low-cost advantages of the simple-tube trailing edge may outweigh the aerodynamic penalty it causes.

If the radius of a round trailing edge gets too large, it will cause a large increase in drag, and a large loss of lift. For most situations, a round trailing edge is quite undesirable and should be avoided, particularly if the trailing-edge diameter gets larger than 1% of the local chord.