Over the past few months we have been discussing various aspects of aeroelasticity. This month we turn our attention to the vitally important subject of critical flutter airspeed. This is of particular concern in the world of homebuilt and Experimental airplanes, where many builders are making modifications to increase the performance of their machines. These modified airplanes are often flown higher and faster than the original design was intended to go. In so doing, the pilots are going onto flight regimes where the flutter characteristics of the airframe have not been determined.

As we have already seen, flutter can be extremely dangerous because it can come on very rapidly and cause catastrophic failure of the airframe. There are misconceptions about flutter speed that have become quite common. This article is intended to expose and discuss these misconceptions, and provide some perspective on their effect on safety from catastrophic flutter.

The mathematics of flutter is very configuration dependent. It is so complex that it is daunting to all but the most expert specialists in the field, and far beyond the scope of anything I could discuss in these pages. It is critically important that the reader should take the principles I am about to discuss as a warning of danger, and not an assurance of safety. 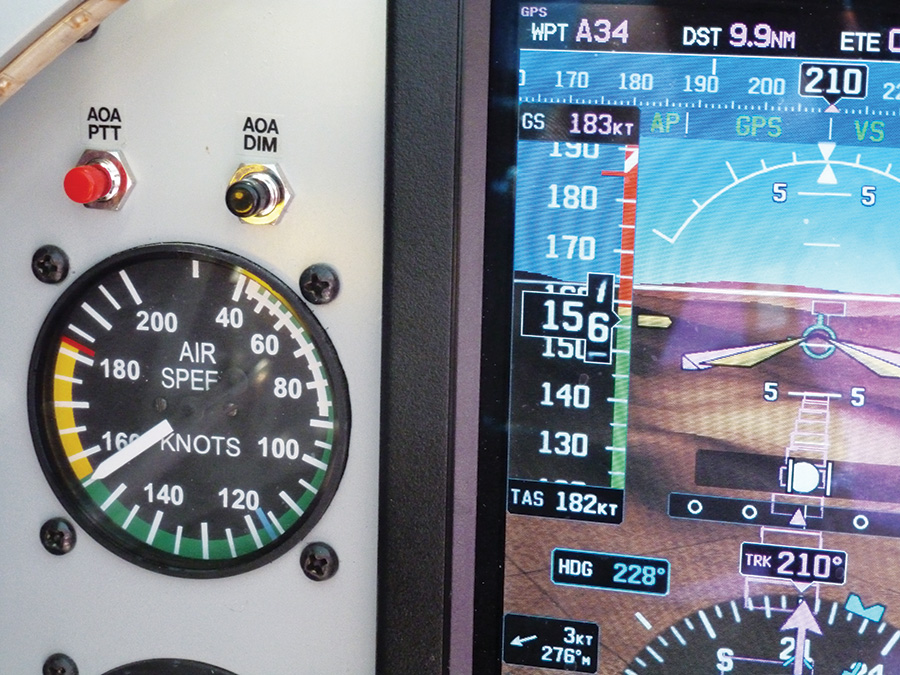 Most modern EFIS displays can adjust the redline to represent the current IAS that corresponds to a fixed TAS redline. This often makes the yellow arc (or band) become very small or disappear completely on the airspeed indicator, as is evidenced in this high-flying picture.

A structure has multiple degrees of freedom, or ways it can distort. Each type of distortion gives rise to a mode of vibration. When two modes have the same natural frequency, the motions of the modes can couple, allowing one mode to directly affect the other.

If two modes couple, and the mode shapes are such that deflection in one mode causes forces that amplify motion in the second mode, there is the potential for flutter. For example, wing twist changes the lift of the outer portion of the wing, which in turn changes the bending moment on the wing. Accordingly, a change in wing twist (one mode) causes a change in wing bending (other mode). If the natural frequencies of the first wing bending mode and the first wing torsional mode are the same, there is a potential for flutter.

As airspeed increases at constant altitude, the magnitude of the aerodynamic forces on the airplane increase proportional to airspeed squared. The natural frequency of some of the deflection modes also change, typically increasing with increasing airspeed.

If the natural frequency of the right two modes come together, and the airspeed is high enough for the aerodynamic forces to overpower the damping in the system, then the structure may flutter. In perfectly smooth air, an airplane flying above this critical flutter speed may not start to flutter immediately. Flutter can be triggered by a gust or a control input that produces a force that excites one of the critical structural modes. Once started, the flutter will continue or build in magnitude until it is either stopped by a physical constraint of the structure or a sufficient reduction in airspeed. If neither of these happens soon enough, the flutter will amplify until the structure fails.

This possibility of exceeding the minimum speed for initial flutter onset without fluttering right away is extremely dangerous because when the flutter starts, the airplane will be flying fast enough for the flutter to be violent and sometimes destructively divergent. It could prove difficult or impossible to slow the airplane down enough to stop the flutter in time to avoid structural failure.

If the proper mode shapes of structural deflection exist, and the frequencies couple as discussed above, there is the potential for flutter. Whether flutter happens or not is dependent on how the forces driving flutter, and the forces opposing it, develop.

In a potential flutter situation, the structure deflects in a way such that the change in shape causes aerodynamic force to develop that tends to increase the motion of the structure in at least one of the critical modes. These aerodynamic forces are driven by the external airflow and add energy to the developing structural oscillation.

There are also aerodynamic forces and mechanical forces that arise as a result of the motion of the structure rather than its distortion. These damping forces oppose the velocity of the moving parts, and absorb and dissipate the energy added to the system by the aerodynamic forces caused by shape changes.

The winner of the battle between these two sets of forces determines whether the system will flutter. As long as the damping forces absorb more energy than the “propelling” forces add, the system is stable and any oscillation started by a perturbation will die out as the damping dissipates the excess energy.

At some point, the propelling forces grow so large that they add more energy to the motion than the damping forces can absorb. At this point, the oscillation starts to grow, until it either reaches a stable amplitude, or until the forces it generates get so large they cause structural failure. Once it starts, the flutter can grow very quickly.

Two airspeeds are important in the development of flutter.

The first is indicated (or equivalent) airspeed (EAS). This is really a measure of dynamic pressure, rather than actual velocity. The equivalent airspeed, which is what a pilot would read from a perfectly-calibrated airspeed indicator, is the speed that would produce the same dynamic pressure at sea-level conditions.

The second is true airspeed (TAS). True airspeed is the actual velocity the airplane is travelling relative to the air.

As altitude increases, and the air density decreases, TAS and EAS diverge. If we fly constant true airspeed, equivalent airspeed will drop with increasing altitude.

If we fly constant equivalent (or indicated) airspeed, then the drop in air density requires that we fly at ever-faster true airspeed as altitude increases.

This is important for flutter safety because most pilots only have indicated, or equivalent, airspeed information in the cockpit, and the onset of flutter is a function of both true and equivalent airspeed.

The propelling forces, which are caused by the interaction between the geometry of the aerodynamic surface and the air, are strictly a function of the geometry itself and the dynamic pressure in the airstream. Dynamic pressure is a function of equivalent (or indicated) airspeed. Accordingly, for a given-shaped surface at a given angle of attack, the aerodynamic forces will be the same at the same indicated airspeed regardless of the true airspeed.

Aerodynamic damping is a function of both equivalent airspeed and true airspeed. Some insight into why this is comes from looking at aerodynamic damping of wing bending. As the wing bends, or flaps, the outer portion of the wing is driven vertically, either up or down, by the motion of the wing flapping. The vertical velocity of the wing, combined with the true forward airspeed, give rise to a change in angle of attack. This angle of attack change increases the lift of a down-flapping wing, and decreases the lift of an up-flapping wing. This opposes the flapping motion and tends to cause it to die out.

At constant altitude, as true airspeed increases, dynamic pressure increases proportionally to the square of the speed. The propelling forces thus increase with airspeed squared.

Since the propelling forces rise more rapidly with increasing speed than the damping does, at some critical speed, flutter sets in.

The situation is dangerously different if we maintain constant equivalent (or indicated) airspeed and increase altitude.

As altitude increases at constant EAS, true airspeed increases. Because the dynamic pressure is constant, the magnitude of the forces that propel flutter stays constant.

This can be dangerous because if the damping drops sufficiently, flutter can set in at an indicated airspeed below what is believed to be the critical flutter speed of the airplane.

There are two “absolutist” ideas about flutter speed that seem to have gained some prevalence in the homebuilt community, particularly among those who are seeking to improve performance of their airplanes.

One school holds that as long as the airplane is flying at or below the indicated airspeed for which it has been flutter cleared, it is safe.

The other school holds that flutter is strictly a function of true airspeed, and that the “real” critical flutter speed is a true airspeed.

Both of These Assumptions are Wrong

As we have seen above, the idea that a single indicated airspeed is valid as a flutter limit is dangerously wrong, since increasing true airspeed at constant indicated airspeed can easily lead to a situation where aerodynamic damping can no longer prevent flutter.

The variation of flutter speed with true airspeed is more complex. We have discussed the effect of true airspeed on damping here, but true airspeed also affects several unsteady aerodynamics phenomena that define how the forces on a rapidly-moving surface develop. These are far too complex to attempt to discuss in these pages. Keeping the airplane at or below the maximum true airspeed for which it has been flutter cleared is more conservative than limiting indicated airspeed, but it is not an absolute guarantee of safety if the airplane is outside the altitude envelope that has been flutter cleared.

An airplane is flutter cleared to a specific flight envelope during testing. This cleared envelope defines the range of speeds and altitudes in which the airplane is safe to fly. If the airplane is flown outside that envelope, either at higher true airspeed or at higher equivalent airspeed (or both), it is flying in an area where its existing flutter testing does not apply, and there is significant danger of a catastrophic event.

Any expansion of an airplane’s flight envelope outside that which has already been tested requires additional flutter testing to ensure safety.

Flutter testing is probably among the most dangerous of flight tests, particularly for light airplanes that lack the sophisticated instrumentation, telemetry, and ground technical support available on big commercial and military airplane programs. If you do choose to test to expand the flutter envelope of an airplane, follow proper testing procedures, and proceed with extreme caution.