So far in our discussion of setting the mission parameters for a new-design airplane, we have concentrated on the up-and-away portion of the mission. While all of these things are important, every flight starts and ends on the ground. Where those flights must start and end can have a very significant effect on the design of the airplane.

Having considered the critical “how high, how far, how fast” questions that define the bulk of the mission that the new airplane will be designed to perform, the next thing we need to define is the airports (or off-airport takeoff and landing sites) from which the airplane must operate. The need to get into and out of these sites safely will often drive the design and cause it to differ significantly from a configuration optimized for the up-and-away part of the mission. 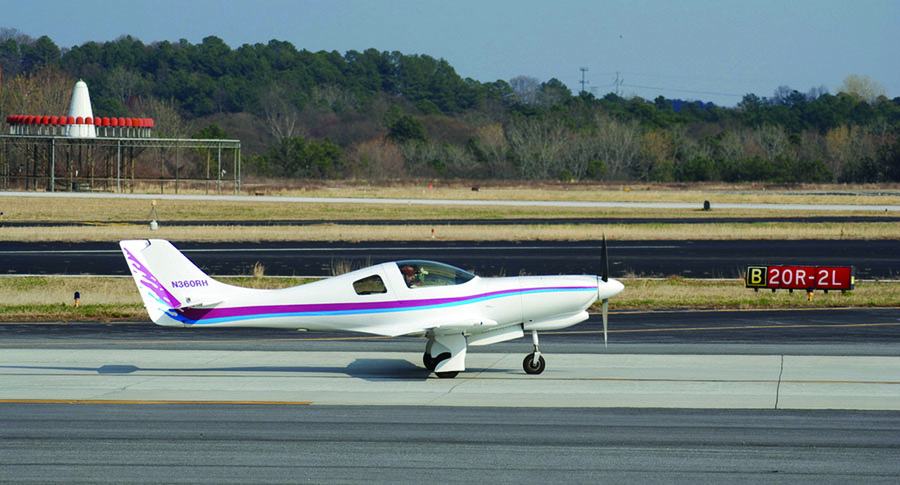 Characteristics that give an airplane high-speed cruise performance tend to drive the required runway length up. (Photo: Omoo [CC BY 2.5 (http://creativecommons.org/licenses/by/2.5)], via Wikimedia Commons)

Looking at the ground bases the airplane will fly to and from, the designer must consider four major factors:

Each of these places demands on the characteristics of the airplane.

The length of the runways the airplane must operate from is the most significant factor we need to address. How much runway the airplane needs is defined primarily by its liftoff speed for takeoff and its approach and touchdown speed for landing.

The ground roll segments of takeoffs and landings are essentially the inverse of each other. On takeoff, the airplane starts at rest and must accelerate to liftoff speed. On landing, the airplane arrives on the runway at touchdown speed and must decelerate to rest. In both cases, the airplane has a force acting on it to change its velocity. The distance it takes to make the required velocity change is a function of the total speed change required and the acceleration (or deceleration).

The distance required to accelerate to a given speed from rest, or to come to rest from given speed, is given by the equation:

where A is the acceleration, and T is the time it takes to make the required change in speed. This time is determined by :

T = ΔV/A, where ΔV is the change in velocity, and A is acceleration.

Looking at these equations, we find that T is a linear function of ΔV, and distance is proportional to T squared. What this means is that both takeoff roll and landing roll are proportional to liftoff speed, and touchdown speed squared respectively. This has profound effects on runway length requirements. Increasing takeoff or landing speed by about 40% will double the required runway, and doubling takeoff or landing speed will quadruple the length of the ground roll. 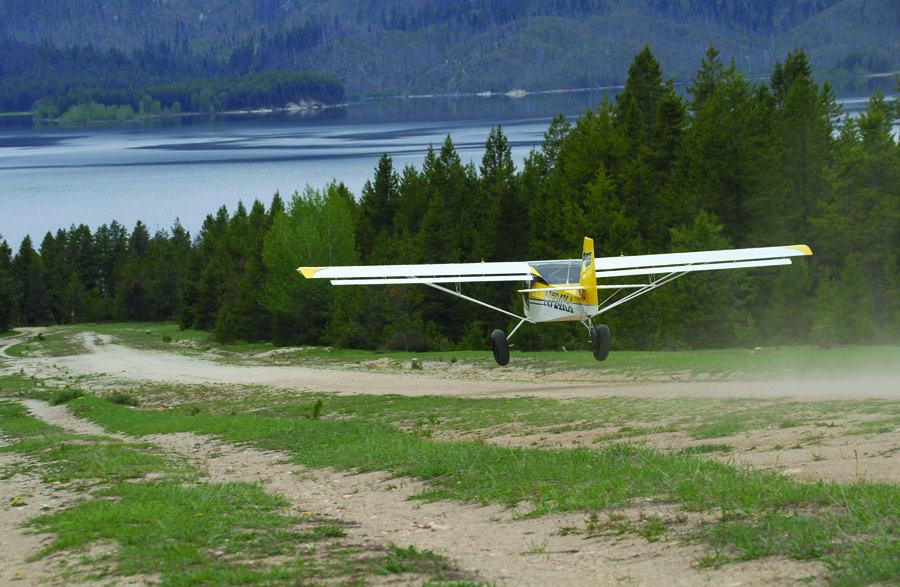 For short runways, airplanes with low wing loadings and high-lift wing airfoils can work well as long as the cruise speed requirements are not high. (Photo: Louise Hose)

The takeoff roll is determined by the liftoff speed, and the acceleration the engine can provide to get the airplane up to speed. Accordingly, the designer has three variables available to control takeoff distance.

This can be a help to the designer of very fast airplanes since the large amount of power needed for high-speed cruise performance also allows the airplane to accelerate faster during takeoff. This can be very important since high-performance airplanes also usually have high liftoff speeds, and therefore need to accelerate smartly to keep the takeoff roll down to an acceptable distance.

There are two other variables that control liftoff speed. These are the wing loading (W/S) of the airplane and the maximum lift coefficient of the wing.

The primary means of increasing maximum lift coefficient is through the use of flaps. This is particularly true for high-performance airplanes, where the shape of the basic wing is defined by cruise conditions, and the use of a base airfoil optimized for high lift will cause an unacceptable drag penalty at cruise.

Flaps can be helpful in reducing takeoff roll up to a point, but they are less useful for takeoff than they are for landing since the airplane must overcome the drag of the flaps to accelerate to liftoff speed and climb away. Large flap deflections, which produce large increases in maximum lift, are also very high drag. For most airplanes, this drag limits the amount of flap that can be usefully employed to shorten takeoff distance.

The designer has a bit less to work with here than on takeoff because for general aviation airplanes, the engine is not useful in decelerating the airplane. Thrust reversing is used on jet transports and some turboprops, but is rarely, if ever, seen on piston-engine light airplanes.

The ability of the airplane to slow down after touchdown is primarily determined by the effectiveness of the brakes and the friction between the landing gear tires and the runway. Both of these are almost constant from airplane to airplane. As long as the brakes are properly sized so that they can absorb the required energy, the braking action available is strictly a function of the tires and the runway surface. While some increase in braking action might be achievable with larger-than-standard tires, this effect is small, and landing distance is dominated by touchdown speed.

Accordingly, the designer’s primary tools for controlling landing roll are wing loading and the high-lift system.

As with takeoff, decreasing wing loading reduces the runway length required to land by allowing the airplane to touch down at a lower speed.

For landing, the designer does have a bit more freedom to use powerful flaps or other high-lift devices to increase the Clmax of the wing and slow the approach speed. On approach, the engine is throttled back, and increasing drag is not as detrimental as it is for takeoff and climb. In many cases, adding drag with extra flap is actually desirable to steepen the approach, and reduce “float” in the flare.

Almost any airplane that has enough power to climb to a reasonable altitude and cruise can get airborne on a smooth runway if it is long enough. The same sort of claim can be made for landing. The critical parameter is “long enough.”

The characteristics that give an airplane good cross-country cruise performance tend to drive the required runway length up. High-speed cruise favors high wing loading, which, in turn increases stall speed. This higher stall speed increases both takeoff and landing roll as we have seen.

By the time wing loading is high enough for good cross-country performance, the airplane will require effective flaps to keep the stall speed down and make the landing roll acceptable for most general aviation airports. Acceptable takeoff performance will require a combination of flaps that efficiently increase lift at a relatively low drag penalty when partially deflected for takeoff, and a high power-to-weight ratio to overcome the higher drag caused by the flaps. Fortunately, this same high installed power is probably already desirable to cruise high and fast.

As the runway length available to operate from shrinks, the requirement for ever-lower liftoff and touchdown speeds drive wing loading down and increase the requirement for effective flap systems. For modest-length runways, airplanes with low wing loadings and high-lift wing airfoils can work well as long as the cruise speed requirements are not high. Ultralights and Cub-class airplanes are good examples of this. As runway length gets extremely short, the design of the airplane is dominated entirely by takeoff and landing, and a combination of light weight, high power, large wing area, and powerful high-lift systems is required to operate at all. The yearly Valdez STOL competition showcases just how short takeoff and landing distances can be for an airplane where everything else about its performance is subordinate to minimizing runway length.

For this month, I have run out of runway and reached the end of my allotted page space. Next time, we will continue our look at how the chosen airport affects the design of the airplane with considerations of surface type, obstacles, and density altitude.