As promised last month, this time we’ll look at a way of creating different colors from your LED strip of three-color lights. To briefly recap, you can make any color of the rainbow, plus black and white, by using a suitable brightness of the light strip’s three primary colors: red, blue and green. Turn them all off and you end up with black; turn them all on, with the correct amount of light from each color, and you get white. 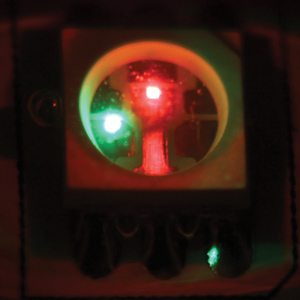 Turning the red and green lamps on makes a pretty orange color.

The human eye is a nearly perfect integrator. In this context, an integrator merely averages a light source over time. It does not matter if a light is bright for a while and then off for a while, the eye will simply see that as a continuous light averaged over time. For example, when a camera’s flash goes off near your face, you still see that flashbulb when you close your eyes. This is your eye trying to average out that brilliant flash over time. 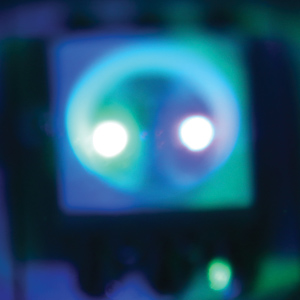 The blue and green lamps together create a nice aquamarine.

Your brain plays a major role in vision. In another example, your retina (that little paint canvas at the back of your eye) sees objects much like a pinhole camera does—everything painted on that retina is upside-down. Your brain goes through an algorithm to turn it right-side up again. If it didn’t, we’d see ourselves walking on the ceiling.

In 1931, the International Commission on Illumination created the chromaticity diagram called CIE 1931. It also came up with the formula to create white: 60% green, 30% red and 10% blue light. Changing these percentages will change your eye’s perception of color in accordance with the CIE-1931 chart. For example, if you turn off the blue and go with a 60/40 mix of green and red, respectively, you get yellow tinged with orange. If you turn off the green entirely and go with a 70/30 mix of red and blue, you get magenta. And so on through the entire range of colors that the human eye can see. 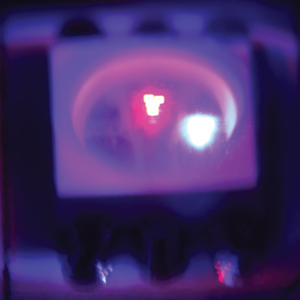 The red and blue lamps together give a magenta glow.

What I’ll give you is a circuit that allows you to adjust each of the three colors of the LED strip to any value you want, from full dark to full bright. The parts are available at any good electronics store, and it will be 100% efficient—for less than $10 worth of parts.

We need just a little more discussion of the human eye to determine what frequency to use for the dimmer. If the eye receives more than 24 individual “pictures” per second, it integrates them into something that appears to be in motion. Keep in mind that the refresh rate of your computer monitor is north of 60 frames per second; your television’s refresh rate is 30 frames per second with what is called interlacing, with which you actually get 60 different frames per second but only half of the picture each time. While it may look like Kermit the Frog is in continuous motion, the camera is actually catching 60 individual shots of him per second. 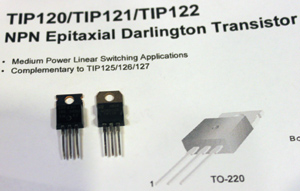 Both the IRF (left) and the TIP will do a good job of lighting up the LED strip.

So let’s run our dimmer with a frame rate of around 120 hertz (Hz), which is 120 pulses per second. If the radios cause any interference with the dimmer, you’ll want the dimmer well separated from the VOR (30 Hz) and localizer (90 and 150 Hz), and far below anything that would get into the VHF COM, NAV or GPS range. If you hear the dimmer as a low-pitched hum, you have a particularly poor ground loop in your electrical system.

We start off with my favorite op-amp, the popcorn-cheap LM324 (four individual op-amps in a single 14-pin package). Here is how it works:

A U101D is a relaxation oscillator with the output (the pointy end of the amplifier) being a square wave that is very near the power supply half of the time and very near ground, or zero volts, the other half of the time. However, at the left end of R111, the charge-discharge cycle of C101 makes a nice sawtooth waveform going between one-third and two-thirds of the power supply voltage 120 times per second—nice and linear, from about 4 to 8 volts, back and forth. 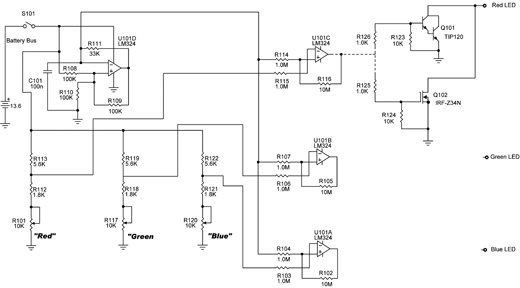 Now let’s look at the lamp driver for the red LED, U101C. Depending on the setting of R101, the output of U101C can be varied from a needle-wide pulse width (very dim) to full on all the time (very bright). By adjusting R101 from one end of its range to the other, the red LED can be full dim or full bright or any value in between. 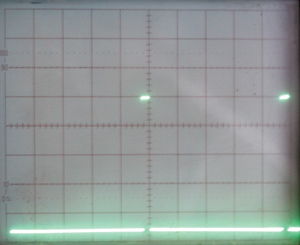 If the waveform at the output of U101C looks like this, the red lamp will appear very dim.

Now we need to concern ourselves with the actual lamp-driver transistors. I have shown two ways of doing things, both of which will cost you less than a dollar, and you won’t see any difference between the two. The Q102 IRF device (part number IRFZ34N) is about a dollar at Jameco Electronics (www.jameco.com), and the Q101 TIP device (part number TIP120) is 40 cents. They are really overkill, as the IRF field-effect transistor is rated for drain currents of 20+ amperes, and the TIP bipolar Darlington transistor can handle 5 amps without much trouble. We are down in the half-ampere range with a full string of lamps, and driving the transistors either full on or full off, so they will be dissipating only a few milliwatts of power. But they are both stable as rocks and among the cheapest parts on the market. 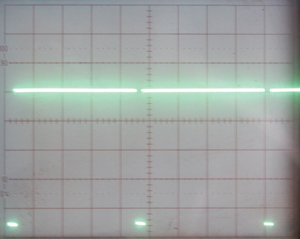 Adjusting R101 to the other end of its range makes the red lamp bright; it will allow you to set the brightness anywhere between the two.

However, you only need one of these transistors per color. I have shown them both to illustrate the circuit. Please don’t try using them both on a single color; pick one or the other. Also, in an attempt to keep the drawing size to a minimum, I did not repeat the lamp-driver transistor(s) for the green and blue LEDs. Just make all three-color lamp-driver circuits identical.

That’s about it for the LED strip lights. Next month I’ll try the “turn the hangar heater on with your cell phone” trick that one of you asked me to design. Stay tuned. 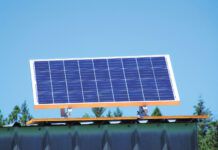 Barnaby Wainfan - September 21, 2018
0
Last month, we began discussing the factors that can drive the wing of our...