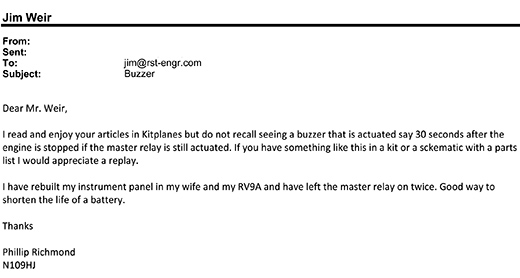 “Dang, dead battery. I left the master switch on again.” How many times does that get said in a day? More than once, I’ll betcha. Here is a simple device that will make that just an unpleasant memory.

What’s supposed to happen when we turn on the master switch? In most aircraft, a hefty relay called the “master battery relay” bolted right to the battery box pulls in and powers up all the electrics on the airplane. If we forget to turn it off at the end of a flight, those electrics will rapidly deplete the juices in the battery, and we are left with a battery with no charge. Worst case would be a couple of weeks like this—now we may have to replace the battery due to a really deep and destructive discharge.

Electronics to the rescue. A simple circuit will let us know within a minute of shutting down the engine that the master switch is still on, and it will beep continuously until we shut it off—all for about five bucks in parts.

How can we detect that the engine is shut off but the master switch is still on? Let’s think about what happens when we shut the engine down.

A Drop in Voltage

At first blush, we might say that we can detect whether or not the magnetos are grounded and the fire to the plugs is therefore removed. Not a particularly good idea for a couple of reasons. First, the magnetos have a very low resistance at the P-lead connection, and we will have to detect a very slight difference between that low resistance when operating and the very low resistance when shorted. Rather difficult. Second, some of the new solid-state ignition systems won’t let us detect even that, and you can’t tell just by looking what the difference between on and off really is. You have to engineer the project model by model.

Another thought concerns monitoring the oil pressure: no pressure, no engine. However, some of us in the dark ages of aviation still use the old Bourdon tube method of gauging pressure, and without the Hobbs switch in line, that doesn’t give us an electrical quantity to measure. Even if we have the Hobbs switch, some are wired normally closed and some normally open. Again, we get to engineer the project one design at a time.

A side benefit of this method (another Weir two-fer) is an alarm that will sound if the alternator (or generator) fails in flight.

Take a look at the circuit. While it may seem quite complex at first sight, it is really a simple and easy-to-build circuit. Once again, we call upon the wonderfully simple and cheap LM324 op-amp to do the lion’s share of the work. 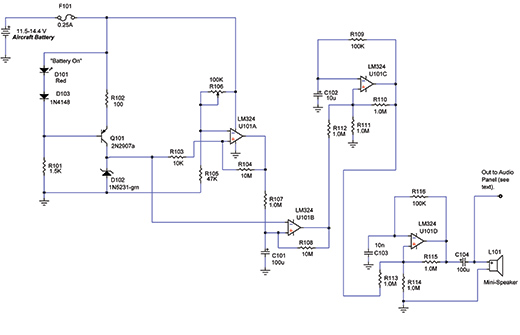 However, we need a really stable source of regulated voltage for this scheme to work. While a resistor-zener diode pair would work at room temperature and a nominal 13-volt battery over temperature and battery voltage fluctuations, it is just a little short of giving reliable results. Q101 and the associated passive circuitry put a constant 15 mA through zener diode D102. The PNP transistor current source is temperature compensated and regulated so that the current through the zener is constant, giving a 5-volt output within 10 millivolts over the limits of temperature (32-122° F) and aircraft battery voltage (11.5-14.4 volts).

U101A is connected as a comparator. The regulated 5 volts is connected through R103 to the non-inverting (+) input. The battery is connected to the inverting (-) input. When the battery voltage drops below a level preset by R106, the output of U101A goes from near 0 volts (ground) to nearly the supply voltage. R104 is a positive feedback to the (+) input to make sure that when this transition from 0 to supply volts takes place, the output doesn’t “chatter” but swings full high to full low instantaneously.

U101B is also connected as a comparator. In the “engine on” mode, when the output of U101A is low, the regulated 5-volt supply on the (-) input keeps the output of U101B low also. However, when the engine stops and U101A goes high, it begins to charge C101 through R107. Approximately 1 minute after the engine stops, U101B output goes high. This causes two things. One is a “wait time” for the battery voltage. Sometimes spikes in the battery current draw (say, for instance, when the landing lights are first turned on) cause the battery voltage to sag and would make the alarm sound. Not good. Another is just random spikes in the battery line caused by lots of things, and we don’t want them to trigger the alarm either. But once the battery voltage goes down for a solid minute, the alarm will sound. Two things will cause this: one is turning the engine off, and the other is an alternator/generator failure.

U101C is a simple relaxation oscillator with an on-off time of about 1 second. When the output of U101B goes high, it turns this oscillator on. The output of U101C goes from high to low and back again in 1 second, creating an on-off-on-off, 1-second-pulse generator.

U101D is a tone generator at about 1 kHz. This is an annoying frequency and was chosen to be just that—annoying. And it is pulsed on and off by U101C, creating even more annoyance. The output of this annoyance is connected through C104 to a small speaker (The Shack has them) or if you prefer, to the alarm input to an audio panel. You may want to put a 10K potentiometer in here for level control; you don’t want the alarm to blow out the cone on the aircraft speaker.

You may be reading this in November, but when I wrote it I was three days away from launching for Oshkosh, certain I would get lots of, “Gee, it sure would be nice if you could tell us how to make one” at my forum.

Thanks to Philip Richmond for the suggestion for this article. Stay tuned.