A feller wrote me a couple of months ago asking for a headset recommendation. Seems that after a few dozen years around military aircraft, fire engines, ambulances, patrol cars, and the like, his hearing wasn’t quite as good as it once was. I can empathize. My first 15 years in this business were spent flying Cessna 120/170s from San Diego to Boston, Oshkosh, St. Louis-not only without noise-cancelling headsets, but without even earplugs. What did I know?

So at any rate, the feller asked me if “hi-fi” headsets would help him hear the aircraft radios a bit better. That got a chuckle out of me because that is exactly what he should not be wearing. A little further discussion brought out the fact that while the aircraft radios were really hard on his hearing, telephones weren’t a problem at all.

That’s quite understandable. There is a world of difference between high fidelity (meaning that you can hear all frequencies from very low to very high-bass drums to piccolos) and communications audio which is meant to convey voice information in a very narrow bandwidth. Tinny telephones are much easier to understand than rock music on the stereo.

As we all learned in second grade, there are two kinds of alphabetic letters(1)-vowels and consonants. It seems(2, 3) as though there is an optimum ratio of consonant energy to vowel energy for optimum intelligibility.

And, for the most part, vowels are constrained to the lower end of the voice frequency band, while consonants are nearly in the dead center-and the human ear is programmed to hear best in the dead center of that band as well.

While it is not a problem per se, it is also true that the lower end of the voice band contains most of the power of the audio signal, and the top end (and higher) contains most of the noise. It seems, then, that if we bandshape the audio signal into our headsets to emphasize the center where both the consonants and vowels are, we ought to be able to increase intelligibility without sacrificing much at all-except that voices will sound tinny.

So then we have to ask the question: What can we throw away from the headphone audio to make it tinny without making it sound too much like your computer’s voice? The second question is how to accommodate pilots that have differing degrees and individualities of hearing impairment.

If we make the rash assumption that somewhere around 1200 Hz (the D two octaves above middle C on the piano) is the center of the audio band, and that we don’t want a whole lot of vowel audio to eat up all our power, then we might want to think about a filter that only passes, say, 800 Hz and above. Similarly, if we say that most noise in the system is above 3 kHz, then we may want to make a filter that only passes 2 kHz or so and below, so that we get most of the consonants. In filter parlance, these are called high-pass and low-pass filters respectively, and may be cascaded (algebraically added together) to give an audio signal that only has components from 800 Hz to 2.5 kHz. This cascading operation of making a band pass filter that only passes audio between these two values is done by adding low- and high-pass filters in series.

Now for some, that may be too much. That may make the audio really clear, but annoying. I will therefore give you filter designs, and you get to pick your upper and lower frequency limits. Experiment with them (the only changes will be penny resistors and nickel capacitors). Please, please let me know what works for you so that I can pass on your findings to others who might be interested. 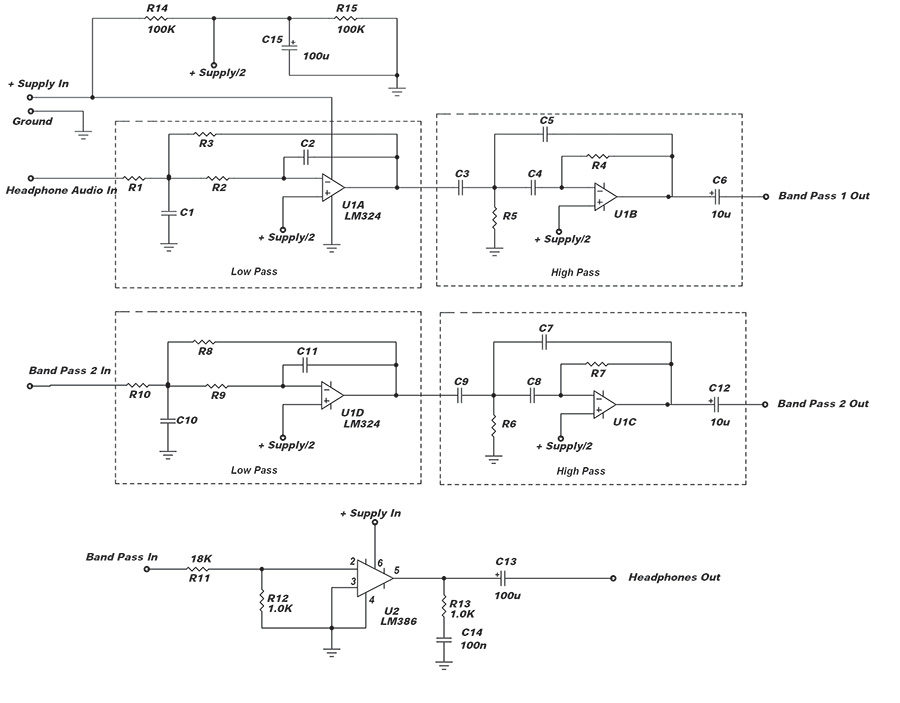 It is also true that filters are not perfect. Instead of absolutely rejecting signals above or below their cutoff frequency, they have a gradual slope that lets a little of the unwanted signal past the filter and thus into your ear. While there are many remedies for this (and filter designs to boot), the easiest way to get better rejection of unwanted signals is to cascade (add in series) additional filter sections to get less of the stuff you don’t want.

The power supply (+ Supply In) can be a 9-volt battery or a 12-volt aircraft bus. (Sorry, 24-volt battery supplies are a bit much; see my column in a couple of months for some ideas.) The 9-volt battery will have a useful life of about 30 hours’ flight time with a headset or two, 20 hours with three or four headsets, and half of that with the maximum eight headsets.

What I am going to give you are values for the low-pass filters that will cut off at either 2 kHz or 3 kHz. Similarly, I will give you values for the high-pass filters for both 500 and 800 Hz. And, to boot, I’ll give you a design for a cheap audio amplifier that will drive up to eight aviation headsets, if that is what you want to do. Below are the values for your filters. Note that the resistors are in ohms (k=1000) and capacitors are in farads (n=nanofarads).

Filter values. Resistors are in ohms (k=1000) and capacitors are in farads (n=nanofarads).

So, what does all this sound like after you get your filters made? I’ve posted some MP3 audio files on my personal KITPLANES web site (www.rstengineering.com/kitplanes) in the February 2015 location, so you can hear for yourself what the effect of each of these filters is.

And what’s to come in the months ahead? I’ve still got the RV look-alike (the aluminum lighted weathervane) in the hopper, as well as the aforementioned “good circuits to know” ideas. It’s going to be a fun year. Stay tuned.

Note 1: Play the game with me. Look up “DITLOID” on the Internet. Then tell me what 26 = L of the A ditloid word equation means.

Note 3: A special thanks to Dr. Lynette Nyaggah of Rio Hondo College in Whittier CA for her corrections of my explanations of linguistics.

In Search of the Perfect Landing