As I said last month, Oshkosh ’15 has come and gone. However, some of the things we learned there are still quite vivid in my mind. One of them is how far we’ve come with modern electronic devices in our homebuilt aircraft. While I don’t think now is the time for me to write about making your own ADSB-Out circuit for two Cracker Jack boxtops and a first class stamp, we might want to look at some of the easy stuff. Like using LEDs for both navigation (wingtip and tail feathers) lights and landing lights. 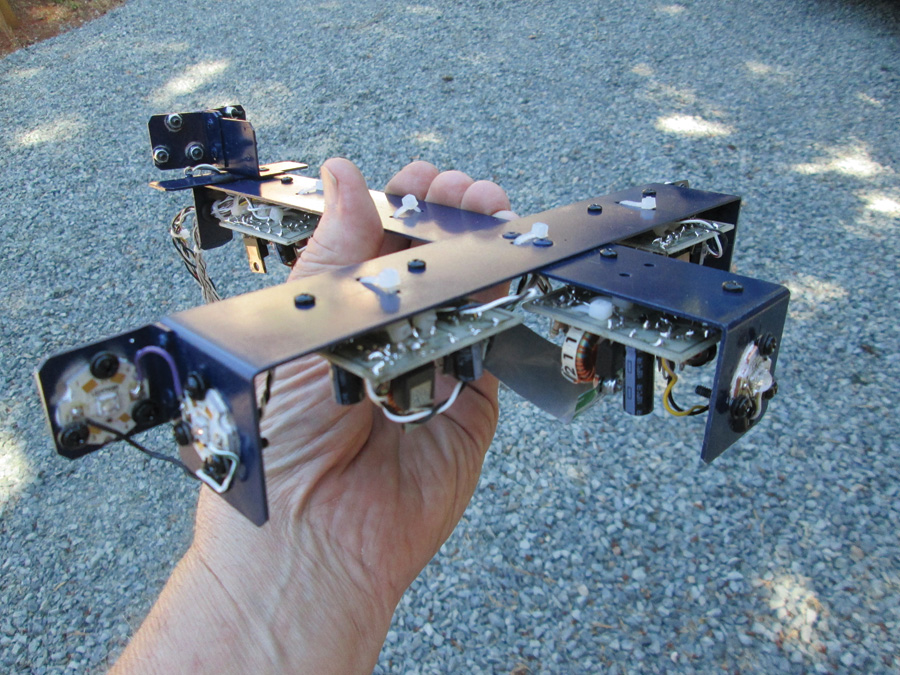 A 30:1 aircraft model with 1:1 LED nav lights (real size). Note: The model is aluminum so it must be an RV of some sort.

About seven years ago (KITPLANES August 2008) we discussed what might be possible in the years to come with LED navigation lights. We neatly sidestepped the landing light and rotating beacon; but the technology has matured to the point where we ought to be talking about all of them.

Just a little tiny bit of history. In 1907 (no, that’s not a typo) radio engineers noticed that passing current through a receiver detector crystal caused it to glow. It took until 1962 for that glow to become useful with the first red LED—cost $2,000 each. By 1968 LEDs cost a nickel each, and we started getting other colors…first green, then yellow, then orange. In 1992 along came the blue LED followed in 1993 by the white LED. This sets the stage for our article this month. 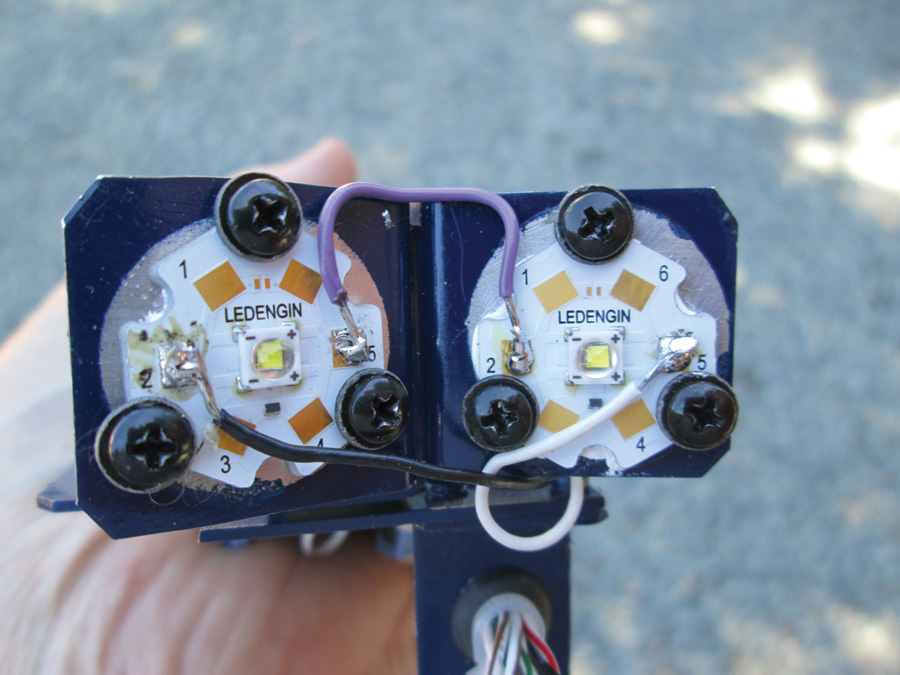 For some years the incandescent bulb has held sway for aircraft lighting. However, incandescent bulbs are roughly 2% efficient at converting electrical power to light. Even worse, when you put them on the wingtips as nav lights, you filter out all the light you don’t want in favor of the color you want. The efficiency goes down to below a tenth of one percent for both red and green. While white is still up there at 2%, LED lamps start at 15% efficiency and are knocking at the door of 20%. To boot, this is the efficiency at the color you want, be it red, green, or white. Nothing is lost to color filtering. 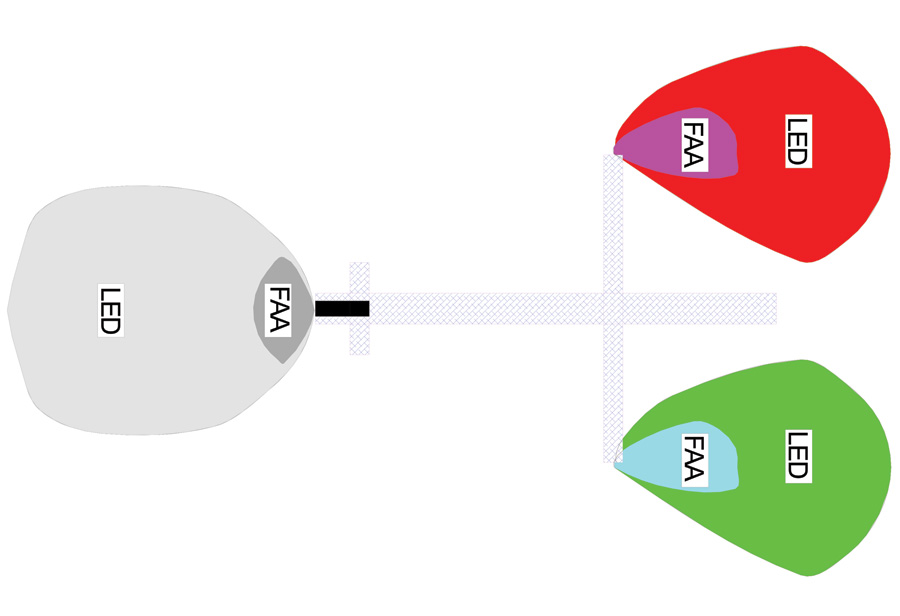 With a single LED instead of the FAA-specified incandescent lights, the coverage is at least 5 times more than required. 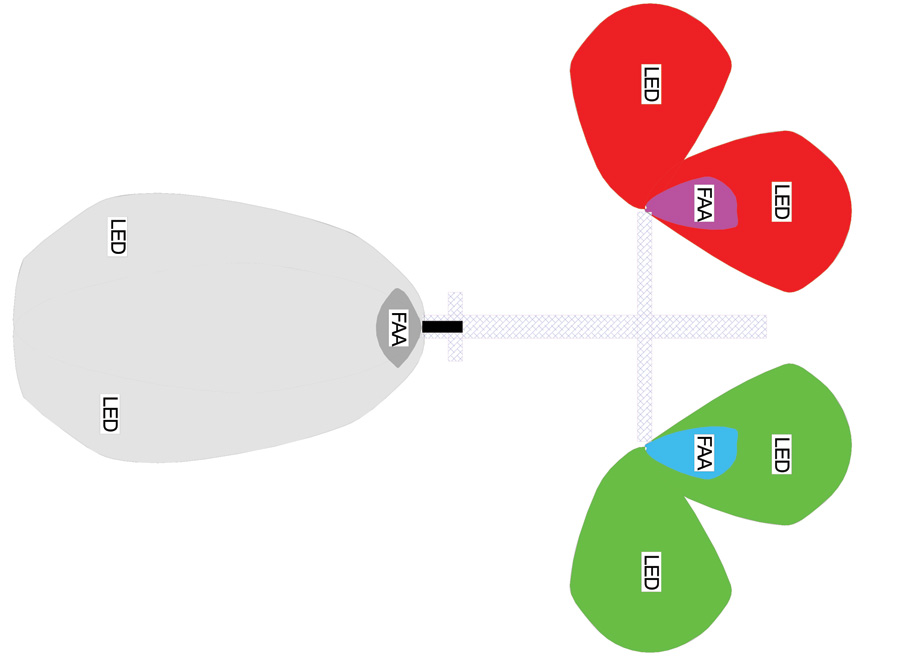 With two LEDs the coverage is 10-20 times the FAA requirement, and the rear angle blind spot problem is solved. 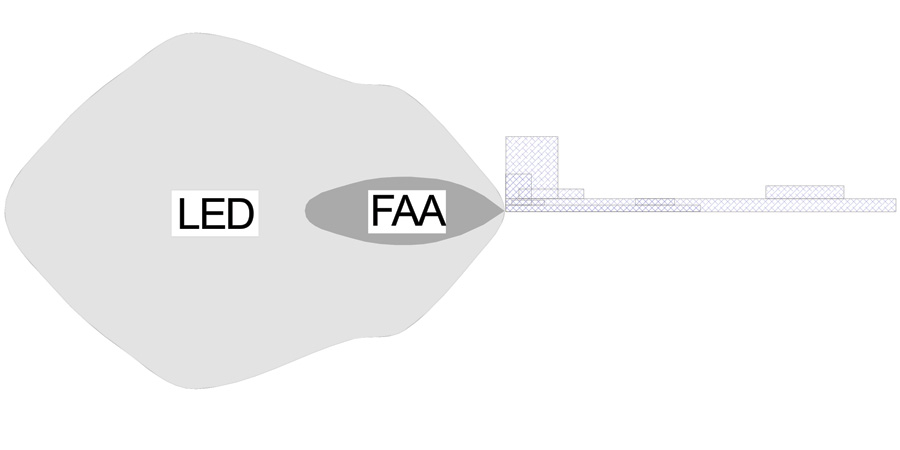 With either a single or double LED, the vertical illumination is at least triple the FAA requirements.

Now that we think we might want LED lighting, let’s see what the feds have to say about lighting on the aircraft. Instrument lights (which we covered in Kitplanes September 2015 issue) are covered in FAR 23.1381 in four simple lines that say that the lights must make the instruments visible and not shine in the pilot’s eyes.

Taxi and landing lights are covered in 23.1383 which say that the lights must give “enough light” for the pilot to see at night and can’t shine in the pilot’s eyes. Nothing more.

Navigation lights are covered in 23.1387 which goes on for four pages of really small type and uses words like “dihedral angles,” “steradians,” “International Commission on Illumination Chromaticity co-ordinates” (i.e. color), and, in the only instance I’ve ever seen in any FAR, integral calculus equations to define brightness. Whuf.

Hmm. Going over that nav light requirement with several sheets of equations and a fair amount of pencil lead gives me graphs that let me prove to myself that this design I’m about to show you will let you put LED nav lights onto your Experimental aircraft in accordance with the regs.

Here, in a nutshell, is what the feds say you have to do with nav lights. You have to be able to see them directly off the wing when approaching, full bright dead ahead, and just a little bit on the other side of dead ahead. Similarly on the other wing, you need the same thing. Thus, dead ahead, you get full brightness from both red and green wingtip lights, but as you move to one side or the other, all you get is the color of that wing light. They also say you have to have about half brightness when you are 45 above or below each wingtip.

On the tail feathers, the white light has to be full bright from dead astern to roughly 90 to the left or the right when approaching from the rear.

Now look at the graphs for single lights and note that there is a complete dead spot in the lighting if you are approaching from the rear of the aircraft from the 4 and 8 o’clock directions.

Be that as it may, we can really improve the FAA minimums using two relatively inexpensive LEDs at each nav light location and eliminate that dead spot when approaching from an aft angle.

Note that now there are two major lobes of light coming from each wing and about 20 times as much light to the aft and sides of the tail as the regulation requires.

“But Jim, how do I install that on my airplane?” Since there are approximately 1000 kit and plansbuilt designs out there, I’d have to do 1000 separate designs and that just isn’t possible. What I can do is give you the general requirements, a few good photographs of how the little model I made was constructed, and let you figure it out for yourself.

What I can also give you are the part numbers and a source for them so that you can start to assemble the parts for this project. You don’t have to use my sources, but you do have to use my manufacturer part numbers if you want my calculations to be valid. Prices are current as of fall 2015 and do not reflect any shipping charges or tax.

Shucks, all those words and we still haven’t seen a schematic as to how to hook them up or how the landing light works. Patience, patience—next month we’ll tackle the landing light, how LEDs are powered, and a couple of ideas on how to (in)efficiently power them.