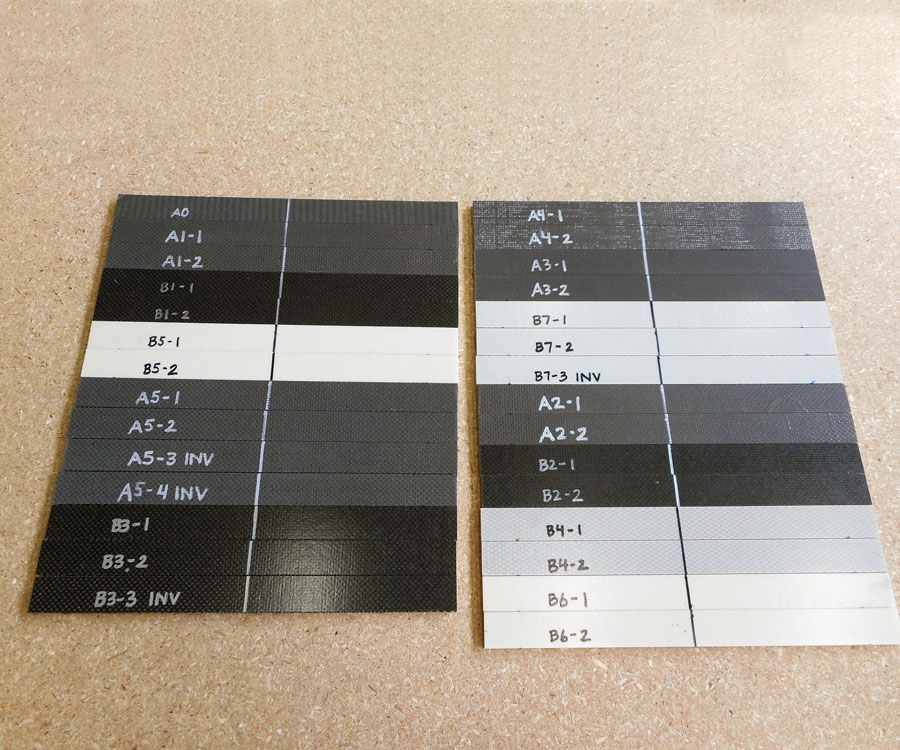 Coupons ready for destructive testing on the UTM. Coupons represent a combination of facesheets (carbon fiber, fiberglass) and cores (foam, honeycomb). Approximately half the coupon panels were fabricated by the SR-1 Project team, the other half are industrially manufactured panels provided by Aerospace Composite Products of Livermore, CA.

This month we’ll look at using a universal testing machine (UTM) to destructively test coupons in order to quantify their strength. This allows the builder to use the strength values derived from the test to engineer or analyze structural components, or compare strength of panels with identical components but manufactured using different processes. For the SR-1 Project, UTM testing allowed us to decide whether we would use hand-laid or manufactured panels for ribs and other flat-panel parts, and the strength values could be utilized to inform finite element analysis of the aircraft. In other words, UTM testing tells you how strong a coupon is. This provides feedback on your fabrication methods, as well as data that can be used to design optimum structures. 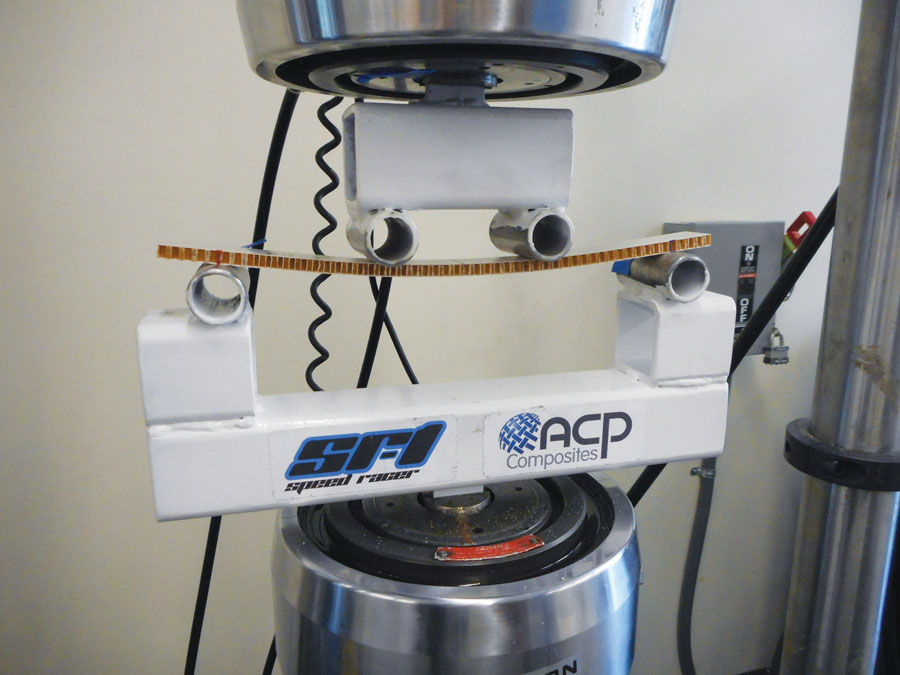 Four-point bending fixture fabricated per ASTM standard D7249. The upper fixture is fixed, the lower fixture rises at a prescribed speed. Video of a test can be seen at the SR-1 Project Facebook page (www.facebook.com/TheSR1Project). Failure is ideally a compressive fracture on the upper surface between the two inner bars.

The SR-1 Project uses flat panels throughout the airplane for components such as ribs, shear webs and bulkheads. I originally theorized that due to tight quality control and the use of prepregs and autoclaving, industrially manufactured panels would outperform handmade panels. However, such panels are usually quite expensive, so being able to compare the performance of handmade vs. manufactured panels would allow us to make a decision as to whether purchasing panels was worth the extra cost. The results were somewhat unexpected.

Perhaps surprisingly, the most difficult part of this project (other than getting time on the UTM itself) was deciding how to break the coupons. Measurable strength properties include tensile strength, compressive strength, shear strength, and laminate-core bonding (i.e., peel) strength. The last of these had already been qualitatively explored in our first series of coupon tests, and there was no need to quantify this property since the structure is designed to avoid significant peel stresses. Shear strength would have been our first choice of tests (since it’s a more typical stress seen in shear webs, ribs, etc. than pure bending) but lacking access to a shear test fixture nixed that. Tensile testing is relatively easy, but compressive testing, while more difficult, highlights potential weaknesses induced when manufacturing unidirectional/isotropic materials.

After studying various tests and speaking with a number of composite engineers, it was decided to use one of the simplest tests available, the long beam flexural test—essentially breaking a sandwich beam in half. This gives a value of ultimate compression strength, with ultimate tensile being calculable from that. For an excellent, concise primer on all the tests mentioned above, I highly recommend Hexcel’s technical note entitled Mechanical Testing of Sandwich Panels.

Laboratories, scientists, and engineers all over the world test stuff every day, so having a set of rules to guide those tests and ensure meaningful results that are repeatable by others is important. The American Society for Testing and Materials has published more than 12,000 test standards that are recognized globally. The particular test standard that governs 4-point flexural tests in composite sandwiches is ASTM D7249, Standard Test Method for Facing Properties of Sandwich Constructions by Long Beam Flexure. The standard is nine pages in length, very clearly written, and is quite interesting and informative.

Unfortunately, ASTM standards are not free, so you either need to purchase a copy online or go to your local university library to read one. However, if you are curious to learn more about composite testing, I highly recommend any of the articles published by Donald Adams in CompositesWorld, an online composites journal. In particular, his article Flexural Test Method Standards for Composite Materials basically explains why D7249 was written the way it was.

Our test fixtures and coupons were fabricated per D7249. They are non-standard, which simply means that they use dimensions other than the standard 560mm support span. Non-standard fixtures/coupons still have other dimensional rules they must fulfill. Our fixture employed a 250mm span, with third-span loading (i.e., an equal distance between all four loading bars). Loading bars were 25mm diameter tubes, polished to minimize friction-induced lateral loads error. Coupons were 300 mm long, 25mm wide, and nominally 6.4mm (1/4 inch) thick. One or two coupons from each of the following panels was tested (see table). 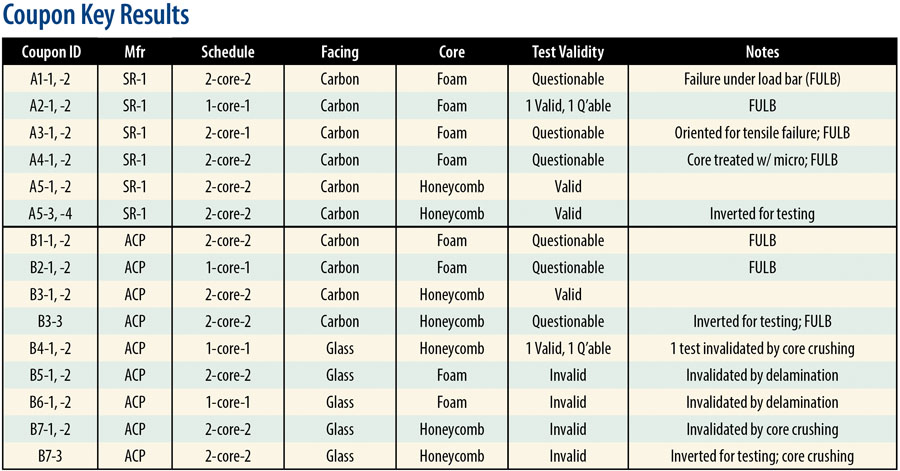 NOTES: Manufactured panels were provided by SR-1 Project sponsor Aerospace Composite Products. Data sheets for ACP panels are available at their website, www.acpsales.com. SR-1 Project coupons were cut from panels that were room temp vacuum bagged at 27 inches Hg for 15 hours, followed by 24 hours room temperature cure, followed by 2 hours post cure at 150 F. Cores were Divinycell H100 foam or 3pcf Nomex industrial grade honeycomb; facesheets are 5.8-ounce plain weave carbon. Whole panel fiber/resin ratio by weight of the SR-1 panels was approximately 60/40. ACP and SR-1 coupons are essentially identical in reinforcement materials and dimensions. The test standard deems acceptable failure to be one occurring “between the (top) loading bars”; according to the test chairman, failure directly beneath the loading bar is a “gray area,” but invalid if due to local core crushing, a likely cause given the form of the SR-1 test fixture.

The graph below compares three types of honeycomb-cored coupons: carbon coupons made by the SR-1 Project (blue), nominally identical carbon ACP coupons (orange), and fiberglass ACP coupons (red). As load (y axis) is applied, the coupon deflects, and this displacement is recorded (x axis). At failure, the coupon can no longer support a load, and so we see a vertical line as load drops to zero or near zero. The slope of the line indicates the amount of flex produced by a given force. Carbon is significantly stiffer than glass, so we see less deflection at the same load. For example, at a load of 60 pounds, the SR-1 coupon has deflected approximately .24 inch, the carbon ACP coupon is .27 inch, and the glass ACP coupon is .40 inch. Since the SR-1 and ACP carbon coupons are similar, they have similar slopes (the ACP coupon is about 1.5% thinner and thus more flexible, which accounts to some degree for its greater deflection). 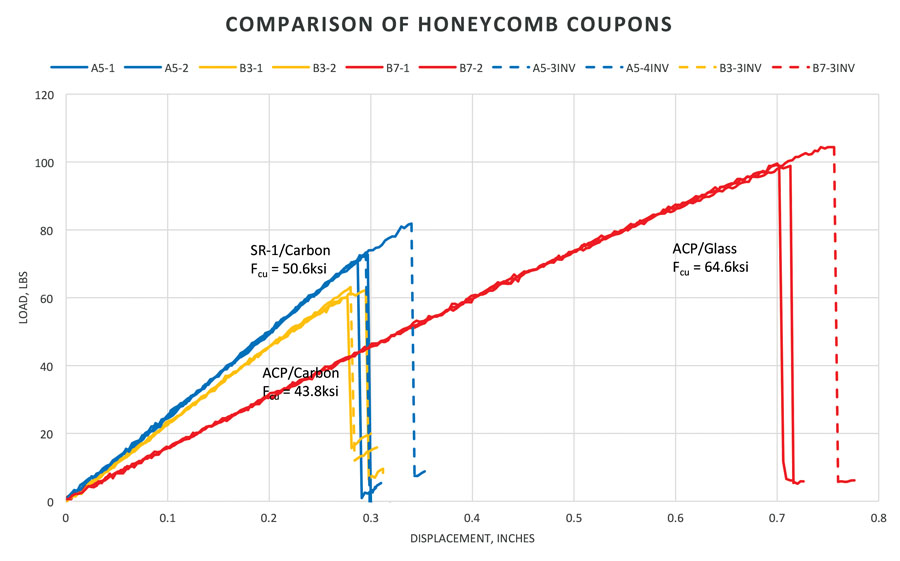 Strength comparison of coupons. At failure the coupons can no longer support a load, and the lines become vertical as the load drops to zero or near zero.

Ultimate compressive strength (Fcu) is calculated from the dimensions of the coupon, span of the test fixture, and load at failure. Since maximum load is only one of several variables, it is possible for a coupon to have a high max load but low ultimate strength compared to another coupon, or vice versa. It is not clear why the SR-1 coupons, which are otherwise identical to the ACP coupons, recorded a higher compressive strength, even when taking into account the slight difference in thickness mentioned above.

The dashed lines represent coupons that were mounted inverted on the fixture. ASTM D7249 specifies that “the bag-side facing of a co-cured composite sandwich panel shall be placed as the upper, compression-loaded facing during test, as facing compression strength is more sensitive to imperfections typical of bag-side surfaces (e.g., intra-cell dimpling) than is facing tension strength.” What this means is that when coupon panels are bagged on a flat surface, the bottom side is relatively smooth (the SR-1 panels were bagged on a sheet of waxed glass), while the top side, which is exposed to peel ply, breather, etc., is typically less smooth.

Such imperfections on the compressive side lead to failure earlier than if the facesheet were smooth (next month’s article will contain a discussion on this issue of microbuckling), so testing the coupon rough side up (i.e., in compression) means that we typically see a lower max load in this orientation than if the coupon were tested smooth-side up. An engineer must design to this lower load unless they can show that the panel will only see tension forces on the rough-sided facesheet.

As mentioned in last month’s article, honeycomb panels that are bagged in a single step (i.e., bottom and top facing both bonded at the same time) tend to see resin seep down the honeycomb and pool on the bottom facing, possibly resulting in poor facesheet bonding characteristics of the upper sheet, which exacerbates the problem for that facesheet. The SR-1 Project manufactured these panels in a single step, so we tested our honeycomb coupons inverted (smoother/stronger side up) to see what the load difference would be. ACP manufactures their honeycomb panels with a thin film adhesive and caul plate, so both faces should have equal amounts of resin and be equally smooth, obviating the above concerns.

(Left) Honeycomb panels bagged in a single process tend to have resin pool on the bottom skin, as seen here. These fillets of resin help bond the laminate to the honeycomb, but excessive resin simply adds dead weight. (Right) The same coupon, inverted. Compared to the bottom, the top bonding interface is relatively dry with minimal filleting. That said, when the skins were later torn off for analysis, both top and bottom skin-to-core bonds were excellent, and none of the SR-1 coupons exhibited delamination during testing.

The inverted tests are inconclusive. For the SR-1 coupons, one coupon was indeed stronger, while the other failed in the same range as the non-inverted coupons. The ACP coupons had similar results. For a degree of statistical validity, the test standard typically requires at least five coupons to be tested for each condition. That is a major limitation of these tests: Because we were extremely limited on machine time, we were only able to test one or two coupons for each condition. That said, removal of facesheets from coupons after the tests showed excellent bonding on both top and bottom surfaces for both the SR-1 and ACP coupons (although the SR-1 coupons did show a tendency for bottom-surface resin pooling, which would affect weight but not strength of the coupons).

We will continue our discussion of the UTM tests next month with a look at the remaining coupons, as well as a discussion of the importance of including a knock-down factor when building with thin laminate coupons. Very cool stuff!

Acknowledgments: Many thanks to Aerospace Composite Products for generously donating the panels for the ACP coupons. Also thanks to Brian Paris for his help with this month’s article. Brian is a graduating senior in mechanical engineering at Cal Poly, San Luis Obispo. He holds a Private Pilot license and was the 2015 Summer Intern for the SR-1 Project.