For the past few months, we have been exploring the flying qualities of gyroplanes. This month we will conclude our gyro series with a look at a subject that has risen to prominence in the world of gyro design: thrust line.

As with all of our previous discussions of gyros, a caution is needed here. Rotorcraft stability and control theory is very complex and much of it is far beyond the scope of what we can cover in these pages. The analyses that follow are highly simplified and intended to give a subjective understanding of some important effects. They are by no means complete or comprehensive.

The traditional Bensen Gyro-Copter configuration has a thrust line that passes significantly above the center of gravity of the machine. In more recent years many gyro designers have reconfigured their designs to bring the thrust line down so it acts through the CG, or in some cases slightly below it.

Much of this effort was in response to a published research paper that called out thrust line position as the major determinant of gyroplane pitch stability. This led to a frequently-asserted claim that all that was necessary for adequate pitch stability on a gyro was a low thrust line. While thrust line has a significant effect on gyroplane stability, the situation is not that simple as we will see. 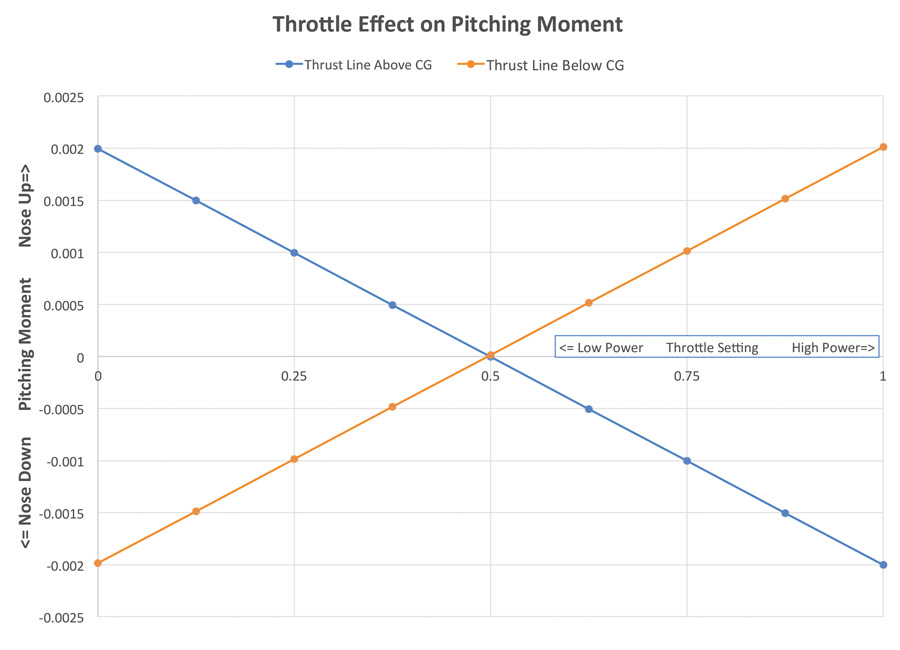 The first factor to consider is the effect of throttle variations on pitching moment. If the thrust line acts through the CG, changing power settings will produce little or no change in pitching moment.

Neither of these characteristics is desirable because the pilot will have to compensate for the thrust-induced trim change with the stick. This increases the workload for a simple power change to climb or descend.

This is not unique to gyroplanes. Airplanes with highly offset thrust lines, like amphibians with pylon-mounted engines, also suffer from this effect.

The trim effect of an offset thrust line is similar for airplanes and gyros. What is different about thrust line position on gyroplanes is that the vertical position of the thrust line affects the pitch stability of the machine.

If the propeller thrust line is moved off of the CG, the inclination of the rotor thrust to trim must also change. The effect of this is shown in Figure 2. The three lines on the figure show the change in pitching moment with angle of attack for three cases: high thrust line, thrust through the CG, and thrust below the CG. In all three cases, the rotor tilt angle has been set to trim the machine at 4 degrees angle of attack (AoA). 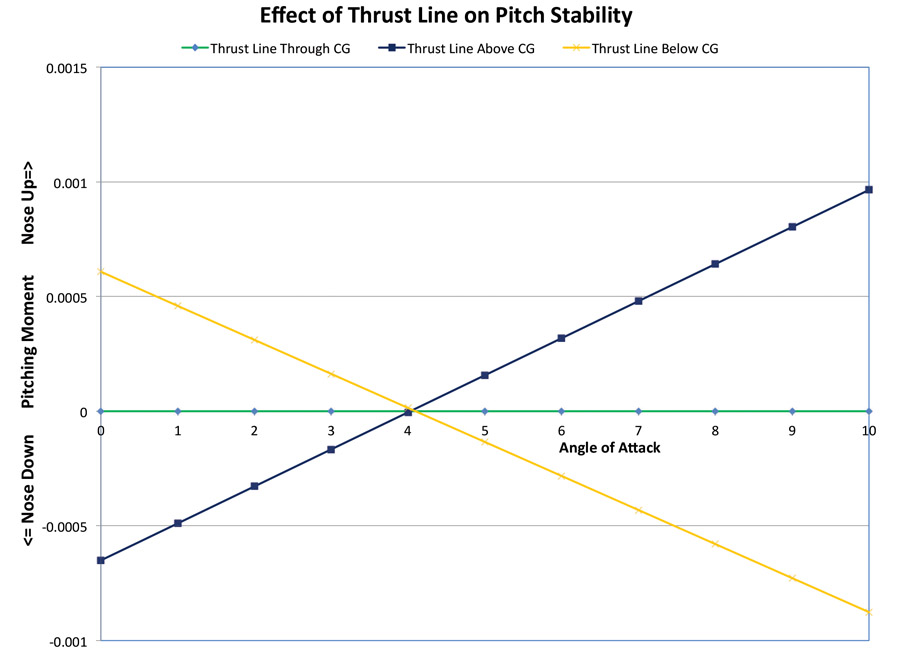 Figure 2: If the propeller thrust line is moved off of the CG, the inclination of the rotor thrust to trim must also change. The three lines show the change in pitching moment with angle of attack for three cases: high thrust line, thrust through the CG, and thrust below the CG.

As expected, the green line, which is for the thrust line through the CG, shows zero change of pitching moment with angle of attack, indicating neutral stability.

The blue line represents what happens when the thrust line is above the CG. The high thrust produces a nose-down moment. To compensate for this and trim the vehicle, the rotor is tilted back. This moves the line of action of the rotor thrust vector forward of the CG, producing a nose-up moment that trims out the nose-down thrust-induced moment.

There is a second effect of this change in rotor thrust vector orientation: With the RTV acting ahead of the CG, increasing angle of attack increases the nose-up moment caused by rotor thrust, and decreasing AOA causes a reduction in the nose-up rotor moment. This is an unstable variation. From this we can see that if a gyroplane does not have a horizontal tail and the thrust line acts above the CG, it will be statically unstable in pitch at the rotor setting required to trim in level flight.

Moving the thrust line below the CG reverses this situation and leads to a stable, trimmed condition. As we saw above, however, this might not be as desirable as one would think because of the way trim changes with throttle.

Another significant point here is that the stability of the gyro changes with power setting. The higher the thrust, the more compensating moment we need from the rotor. For a high thrust line, this means that the rotor must be tilted back more, and the gyro will become even more unstable. It’s quite possible that this effect contributed to the fact that the early slow-flying Bensens were reasonably manageable, but serious accidents started to happen as people tried to increase gyroplane performance and fly faster.

The effect of thrust line on overall flying qualities is complicated further by the way propellers behave. At constant power, the thrust of a propeller is approximately inversely proportional to airspeed. As airspeed increases, propeller thrust drops and vice versa. If the thrust line does not act through the CG, this causes the thrust-induced pitching moment to vary with airspeed.

This effect is illustrated in Figure 3. As before the gyros are trimmed at the same condition initially.

The blue curve shows the case for a high thrust line. As airspeed falls below the trimmed airspeed, the thrust of the propeller increases. Because the thrust is acting above the CG, this causes the prop to generate more nose-down moment. If airspeed increases above the trimmed airspeed, the propeller thrust drops, which produces a net nose-up change in pitching moment. 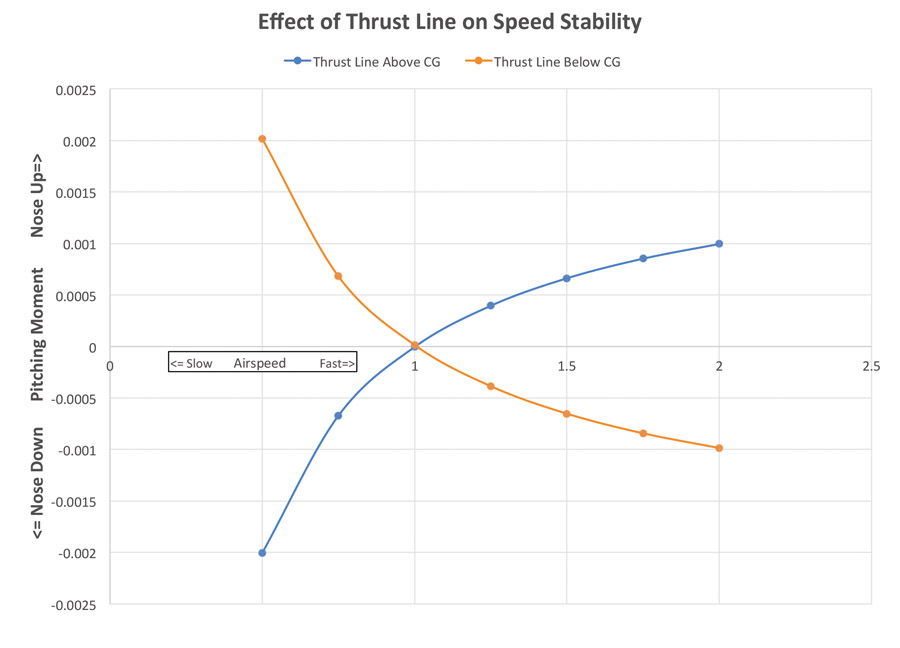 Figure 3: At constant power, the thrust of a propeller is approximately inversely proportional to airspeed. As airspeed increases, propeller thrust drops and vice versa. If the thrust line does not act through the CG, this causes the thrust-induced pitching moment to vary with airspeed.

This is a stable behavior. The thrust-induced moment tends to drive the nose down if airspeed drops, and up if airspeed increases, which causes the machine to seek to remain at the trimmed airspeed. The opposite is true if the thrust line is below the CG, as shown by the orange curve in the figure.

Positive speed stability can mask or compensate for low or slightly unstable static pitch stability and make a statically unstable vehicle more flyable. Once again, this may be a contributor to why the classic gyro configuration was flyable over a limited envelope.

There is one other effect of a high thrust line that can exacerbate a very dangerous situation. Many gyro accidents involve a rapid pushover or nose-down pitch that leads to the rotor flapping downwards and hitting the tail or other fixed parts of the machine. It’s possible to get into this deadly situation through a too-aggressive push on the stick, but a high thrust line makes it worse.

A gyroplane rotor produces pitching moment by aiming the rotor thrust vector. If the rotor is unloaded, there is little or no rotor thrust to aim, and the pilot is left without effective pitch control. In this situation, a high trust line becomes very dangerous because the thrust of the propeller, acting above the CG, will still cause a nose-down pitch acceleration. The combination of high power and low rotor load will lead to a rapid nose-down pitch (often called bunt-over) with disastrous results.

From the above we can see that thrust effects on gyro stability and control are not simple. We can, however, draw a few conclusions:

A thrust line that passes slightly above the CG might actually be desirable on a tailed gyro to improve speed stability, but large vertical offsets of the thrust line are undesirable and should be avoided.