In the past few months, we have been looking at the various factors that affect the longitudinal balance of an airplane. We have seen how the arrangement of the fixed and variable masses of the airplane’s components and contents affect the position of the CG. Last month, we took a look at how the geometry of the horizontal tail affects the forward and aft limits of CG position for safe flight. Now it’s time to combine these factors to determine the tail size for the airplane we are designing.

Last month, we were introduced to the “scissors” plot that shows the variation of forward and aft CG limits as a function of tail volume coefficient. Such a plot, for the same example airplane as used last month, is shown in Figure 1. There are now two additional vertical lines on the figure, which represent the most forward and most aft physical CG positions the airplane might be loaded to during operations. In this first example, the CG can be anywhere between a most forward position of 18% MAC (mean aerodynamic chord) and 38% MAC. The tail must be sized so that the airplane is safe to fly for any CG position inside this range. 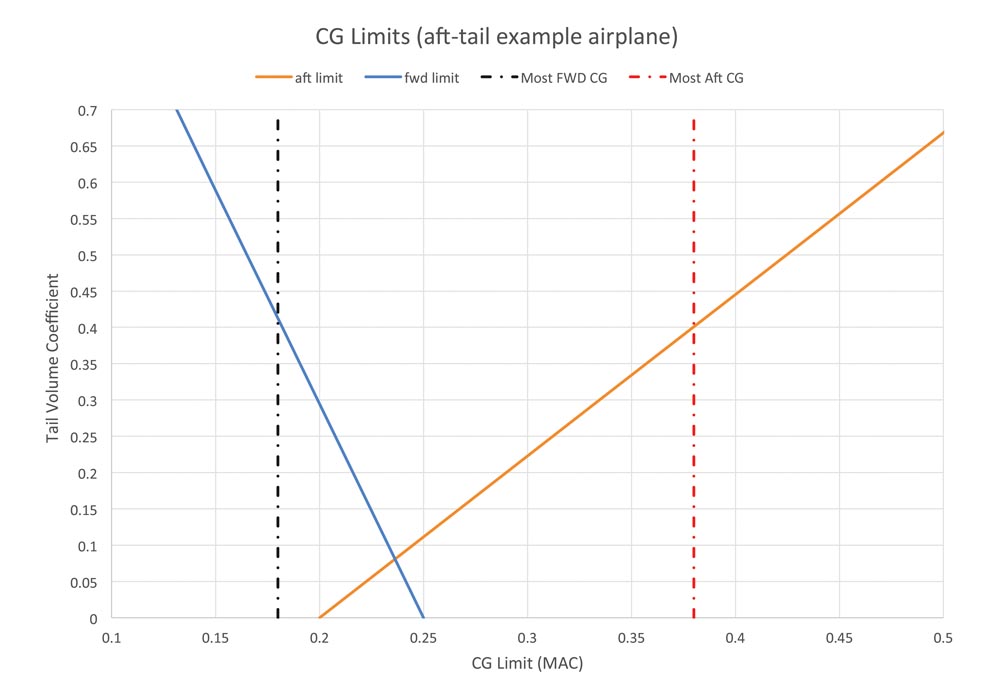 Figure 1: In this example, the CG can be anywhere between a most forward position of 18% MAC (mean aerodynamic chord) and 38% MAC. The tail must be sized so that the airplane is safe to fly for any CG position inside this range.

Tail size can be determined by looking at the intersections of the most extreme CG position lines and the lines representing the aerodynamic limits.

The “most forward CG” vertical line intersects the forward aerodynamic limit line at a tail volume coefficient of about 0.41.

The “most aft CG” vertical line intersects the aft aerodynamic limit line at a tail volume coefficient of 0.40.

The absolute CG travel between the most forward and most aft CG positions affects how big the tail must be. Figure 2 represents the situation for the same example airplane with a reduced physical travel of the CG. For this example, the most forward CG is at 20% MAC, and the most aft CG is at 34% MAC. 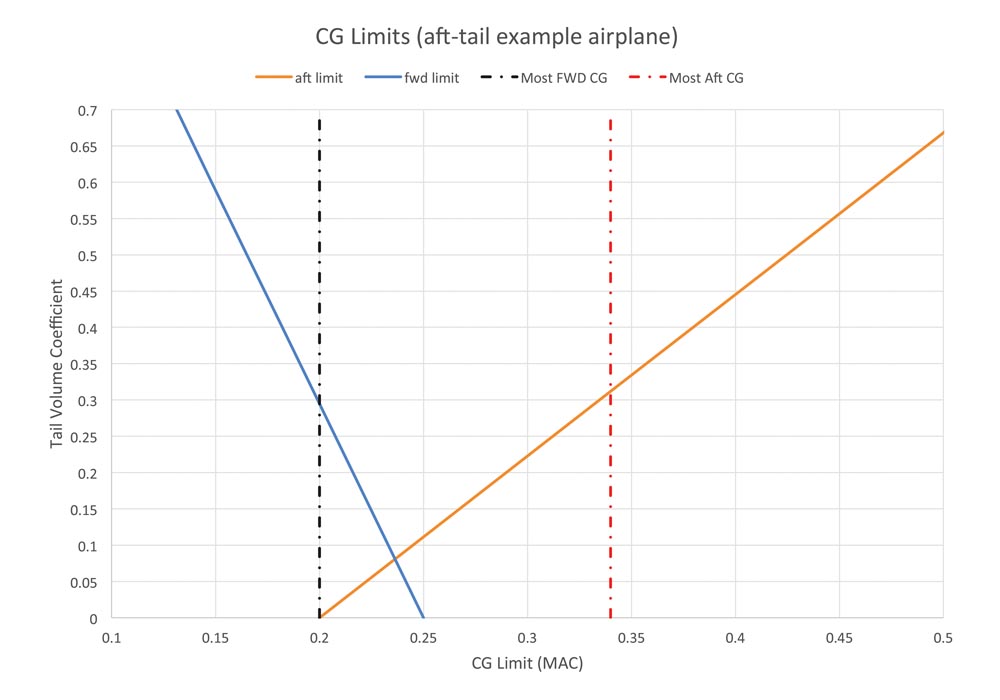 Figure 2: The same airplane shown in Figure 1, but with a reduced physical travel of the CG. Now the most forward CG is at 20% MAC, and the most aft CG is at 34% MAC.

In general, the less the CG moves between its most forward and most aft physical positions, the less tail the airplane will need to fly safely. There are other aerodynamic considerations that will eventually end up sizing the tail to bigger than zero, even for an airplane with zero CG travel, but for most properly balanced conventional configurations, the physical travel of the CG is the strongest driver of tail size.

Both of the airplanes in the previous examples were properly balanced designs. The position of the physical CG range was properly placed relative to the aerodynamic center of the configuration so that the tail sizes dictated by the most-forward CG and most-aft CG were close to the same. It is highly desirable to end up with a design that has this characteristic, but it’s not uncommon to find that the airplane is either nose-heavy or tail-heavy during an early design iteration. 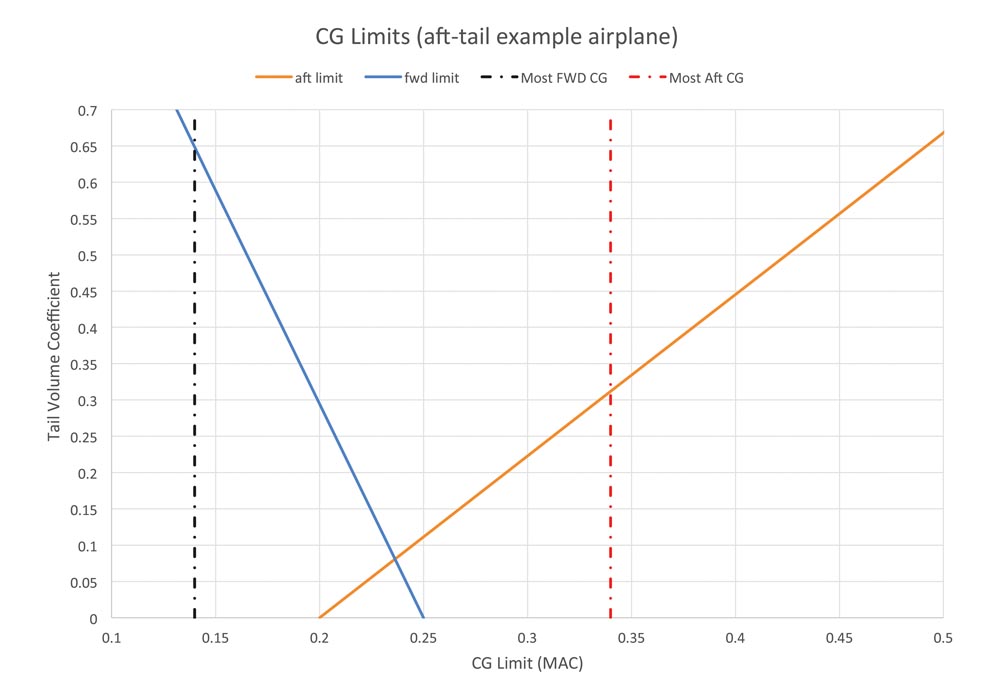 Notice that even though the total travel of the CG is the same as our first example, this new airplane requires a tail that is more than 35% larger. This is because the forward-CG requirements are stressing the tail more than in the more-balanced design, so even though the aft limit issues are less, the tail needs to be much larger to address the forward limit. 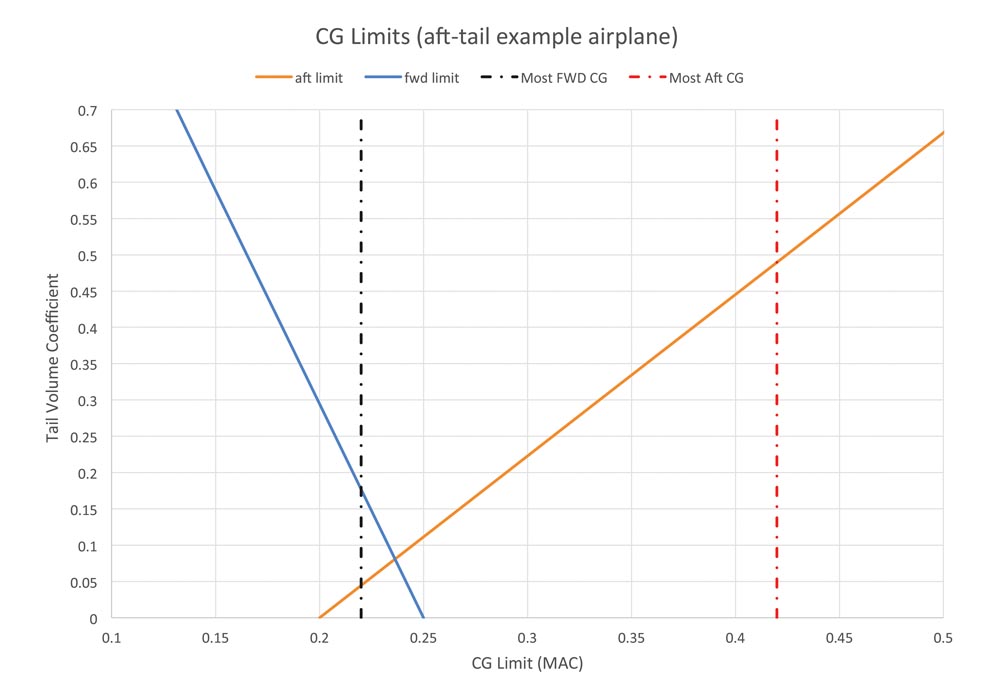 Figure 4 shows the situation for a tail-heavy airplane. Once again, the total CG travel is 20% MAC. The most-forward CG is now at 22% MAC, and the most-aft at 42%.

As with the nose-heavy case, the tail sizes dictated by the opposite ends of the CG envelope are different. This time, however, it is the aft limit that sets the tail size. The most-aft CG position requires a tail volume coefficient of 0.49, while the most-forward CG only requires 0.17.

Although this example is not as severe as our nose-heavy case above, it still requires a larger tail than the well-balanced case shown in Figure 1.

A few observations for the designer:

First, keep the total CG travel as small as practically possible. This has multiple benefits. The tail will be smaller, cutting drag and weight. Also, the flying qualities of the airplane will vary less with how it is loaded.

If the airplane is nose-heavy or tail-heavy, it is worth some effort to cure this with the fundamentals of the configuration instead of simply band-aiding it with a bigger tail. Although all four airplanes in our examples would be safely flyable, the nose-heavy and tail-heavy airplanes are flawed designs.

If the airplane is out of balance this way, the designer has two general approaches available. The first is to rearrange the masses that make up the airplane and its contents to move the CG range to a better place relative to the aerodynamic limits of the configuration.

If it is geometrically possible, the best way to accomplish this is to move the whole wing forward or aft. If structural or configuration integration issues force the position of the wing root to stay where it is, then some movement of the wing MAC can be achieved by changing the wing planform and introducing a modest amount of wing sweep.

One example of this approach is the swept-back upper wings seen on some biplanes. It’s desirable to have the root of the upper wing well forward of the cockpit so the wing does not interfere with entry and exit from the cockpit. This moves the wing far enough forward that the airplane will tend to be tail-heavy. By sweeping the upper wing back, the designer can move the aerodynamic center of the wings back to where it needs to be, while leaving the upper-wing root forward of the cockpit.

Although it is less common, there are some light airplanes that have a small amount of forward sweep to allow the wing carry-through structure to pass behind the pilot’s seat to allow the fuselage to be shallower. Examples of this design approach can be seen in the Cygnet experimental airplane and the Blkow Junior.

Kitplanes - November 12, 2004
5
by Ralph Taggart Most sport gyroplanes aren't beautiful or even cute, but there is no...