In July of last year, I introduced you to the concept of voltage regulation with the little old 78L05 100-milliamp, 5-volt regulator and the promise that I would get into real power regulators in a future column. Well, here we are.

Last month we were introduced to a very fine regulator that is rated at 1 ampere, but in fact will not shut down until it gets to 1.5 amps. That was the LM317 regulator in the cheap plastic (TO-220) package. That regulator also comes in a metal-can (TO-3) version for those of you who want to run it near its heat limits. You can get a lot more heat out of the metal can than you can with a plastic package with a small metal tab. 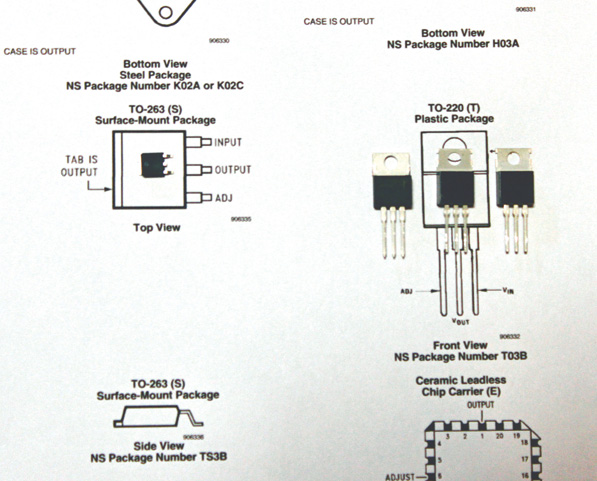 If heat is not your enemy, then the LM317 comes in several small plastic packages suitable for surface-mounting on a printed circuit board. These small plastic packages (TO-202, SOIC-8, TO-252, TO-92) have a metal tab in some versions that allows a large surface area on the PC board to act as a heat sink. These devices also come in various current capabilities from 100 mA to half an amp, and they have all the over-temperature and short-circuit-shutdown capabilities of their big brother. Again, if you are fighting heat, this integrated circuit also comes in a metal can (TO-39) to which you can attach a relatively large heat sink.

All of these ICs are available from the usual suspects (Mouser, Digi-Key, etc.) and come from an amazing array of manufacturers (Fairchild, National, ONsemi, STmicro, Texas Instruments), which pretty much assures that they will be around for a long, long time. 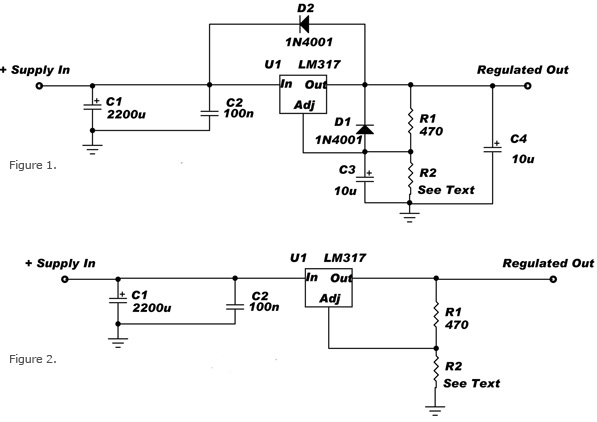 What we have not done is a complete design for a standard voltage regulator with all the bells and whistles that I normally use. The schematic (Figure 1) shows the whole design, which Ill go over item by item.

C1 is the standard power supply filter capacitor. The choice depends on a whole bunch of things, but I like to use 2000 microfarads (μf) per ampere. This is nominally a 1-amp regulator, so 2000 μf will work just fine.

C2 is a squeal-stopper. C1 works to keep ripple and hum from the supply line, but C2 should be within an inch or two of the LM317. It needs to be a short-circuit bypass to ground for high-frequency oscillations that the LM317 is capable of producing if the input is not well-bypassed for high frequencies.

D1 is going to short C3 to ground if the output port is grounded. Were it not for D1, all the voltage with a charged-up C3 would dump into the ADJ port, effectively letting all the magic smoke out of U1. D2, similarly, keeps C4 from discharging through the LM317 with a short on the input voltage line.

Resistor R1, in conjunction with resistor R2, sets the output voltage. R1 at 470Ω is so much above the current requirement of the ADJ terminal that we normally do not even include the ADJ current in the equation.

Now, 4042Ω resistors are generally not found on the shelf. As a matter of fact, Id probably use a 3.3kΩ fixed resistor in series with a 1kΩ variable resistor (potentiometer) to set the output voltage precisely. Or use a 5kΩ potentiometer and a steady hand. And there are a few more things to consider:

The + Supply In needs to be at least 2 volts above the Regulated Output.

Figure 2 shows the bare-bones regulator for non-precision use. In actuality, the book says that if you limit C3 and C4 to 10μf, D1 and D2 are not necessary. However, in the real world Ive killed a couple of LM317s mysteriously without these diodes, but never one that had been protected.

But, Jim, I need more current, you might say. All right.

The LM150 is a pin-for-pin replacement for the LM117 (and, yes, there is a cheap LM350 version). It will put out 3 amps guaranteed. The caveat is that the heat-sinking must be much better than the LM317. (Same output short-circuit and over-temp shutdown circuits internal.)

The LM138 is a pin-for-pin replacement for the LM117 (and, yes, there is also a cheap LM338 version available). It will put out 5 amps guaranteed and has an internal circuit that will let a transient draw 12 amps for a short time without the regulator shutting down. The caveat is that it needs heat-sinking on steroids if you are going to keep the temperature under control. (Same output short-circuit and over-temp shutdown circuits internal.)

There you have it for this New Years edition. I think that I will take you down one more row with the voltage regulator thing and show you how to make this voltage regulator into a constant-current regulator, offer a few tweaks that might help if you want to make a 24/28-volt regulator, explain how to slow up the initial voltage output (slow turn on) and a few other goodies that this amazing device is capable of. Until then, stay tuned.