There is an ancient saying in aviation: If it looks good, it probably flies good. The GeeBee racer notwithstanding, this old adage holds true in the vast majority of cases. The Lancair…looks good. The VariEze…looks good. The Back Yard II first model (Revision A)…looks like a pile of plumbing.

Yep, that moosey 3-inch water pipe really resembles a modern version of the GeeBee racer. Plug ugly. Not only that, but I hoisted the fool thing up onto the mounting pipe, and there it sat for all to see: gangly, ungainly and the only blue thing in a high mountain forest of brown and green. I like my designs to stand out, but not this way.

Back to the Drawing Board 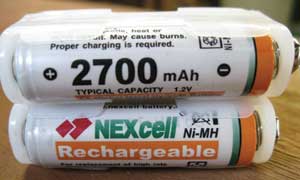 Some things became evident when I analyzed the reasons for revising the design. One, the size. It probably would have outlived the house, but it just overwhelmed the rest of the fairly delicate yard structures. It even made the woodshed look fragile by comparison. And its weighty. The mounting pipe is made out of 3⁄16-inch water pipe and may have held it, but I have my doubts that it wouldve survived a really good windstorm. We get those up here in the hills, and they’re strong enough to uproot century-old oak trees. Ive measured 55 knots and was too scared to get close enough to the window to read the meter in one real howler about 20 years ago.

Two, the color. I love blue. The family Cessna is light blue with dark blue trim. Or as one of the gang going to Oshkosh in loose formation called it when trying to find me against a crystal clear blue sky, the Stealth Cessna. But not in a yard predominated by greens and browns.

Three, the price. Three-inch fittings are expensive. A plain old water pipe T fitting is less than $2 in standard sizes. Get the big stuff that is special order, and you are talking more than 10 times the cost. 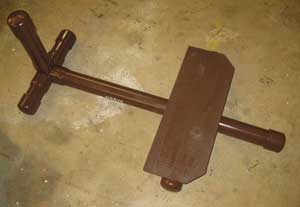 The solar panel mounting board is held to the airframe with Velcro. This is the only wood in the airplane, and it has three coats of paint to keep it from deteriorating like Back Yard I did in five years.

Four, the finish. Primer and I have never really made friends with one another. I didn’t prime the blue version before I painted it, and to hide all of the holidays on the surface, I wound up with about five coats of blue paint, making the thing just that much heavier. There are three rattle-cans of blue paint on that monster, and I can still see some faint white pipe showing through.

Five, the fittings. There are some plastic fittings that just aren’t made in 3-inch pipe, so you wind up cobbling things together to make it work. Case in point is the vertical fin on the blue version. I couldn’t find a single fitting to do the job, so I had to jury-rig a plain cross with an L on it to make a vertical connection for the fin pipe.

So how do we improve the design? First, we get ourselves down to The Shack (which, at least around here, still stocks component parts) to find battery clips that will let us put all four cells inside of much smaller pipe. How much smaller? If you are careful and find AA cells that will power the lights all night, you can stuff all four cells hot-glued together inside of 1.5-inch PVC water pipe. The nice thing about inch-and-a-half is that the smallest mom-and-pop hardware stores stock this size. 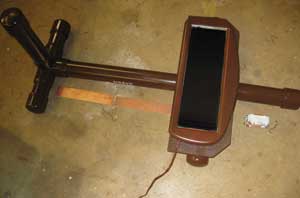 Second, how much power do those lights really take, and can we find batteries that will let them run all night? OK, we have port and starboard nav lights, a single taillight and two anti-collision strobe lights-five lights in all. They each take a maximum of 25 milliamperes at full brightness. Thats 125 milliamperes total, and we have days with roughly 15 hours of darkness at the winter solstice. That means we will burn 1875 milliampere-hours of power to keep our lights on all night. Fortunately, battery technology has come a long way in the last five years, so we can get batteries that have not quite double that capacity.

If we need 1875 mAh (lets call it 2000 mAh just to be on the safe side), how much can we expect from our solar panel that is rated at 1.5 watts with 9 hours (worst case) of daylight? The Ohmish answer is that best case we will get about 2800 mAh of power. But we know that isn’t going to be the case. There will be days (in some places lots of days) when the sun will never make an appearance, and there will be little, if any, charging. Other than piling in more batteries and doubling the size of the solar panels, we are just going to have to resign ourselves to the fact that there will be dark nights when the lights wont shine. Thats a design compromise Im willing to accept.

Third, the fittings and the size. We’ve pretty well settled on the size (1.5 inch) of the pipe, and the nice thing about this size is that some folks use it for structural work (like the hot tub cover in the back yard). There are goofy fittings like the side-pipe T that supports both horizontal and vertical stabilizer pipes that are relatively inexpensive. 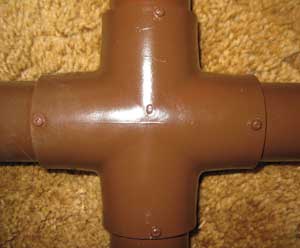 Hold the pipe to the fittings with small wood screws so that it can be disassembled if necessary.

Fourth, the color…and the primer…and the wash. There is a pretty savvy old feller down at the paint store who advised me to wash the PVC with lacquer thinner before priming it. He says (and Im not going to go against 50 years of experience) that the lacquer thinner opens the pores of the plastic and allows the primer to soak into the plastic. That thinner wash will also remove any grease or oil that happened to find its way onto the surface. Guess what? That primer (brown like the paint) sticks like glue, and the brown final coat paint sticks well to the prime coat. Success.

OK, its all together now, and we have something that looks like we can electrify. Next month comes the switching power supply and the lamp drivers for Back Yard II Rev. B. We might even be able to shorten the fuselage as a function of how small we can make the circuitry. If I can fit it all onto one 8-inch piece of PC board material, we might be able to cut 4 or 5 inches from a fuselage that was purposely made too long on the off chance that we would run into some design problems with the electronics. Next month, the electronics and wind up. 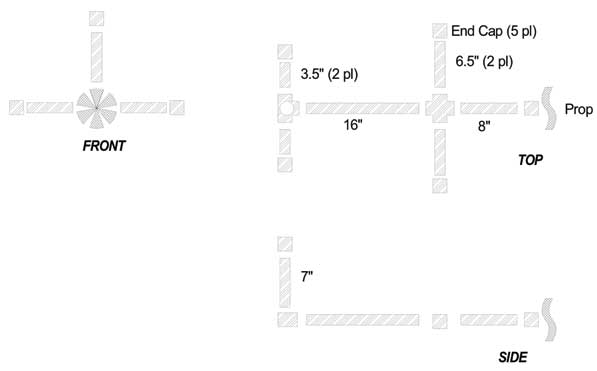 Bob Hadley - November 14, 2022
1
When it comes time to remove and replace bearings or bushings that are press...