Last month we considered the case of an airplane with acceptable stick force per G that still gave the pilot the impression that it was difficult to control precisely in pitch. We now turn our attention to the much more common case of an airplane that has an unacceptably low stick force per G. Our goal is to use the data taken in a series of flight tests to determine exactly what is causing the unacceptable behavior and then use this information to identify the best way to fix the problem.

The flight tests, which were described in previous months, give data on several characteristics related to the longitudinal stability and control of the airplane. They are:

Test 4, Stick force required to hold an off-trim airspeed; and

If the variation of trim elevator position with airspeed is unstable or neutrally stable, then we have identified the primary problem. The airplane has insufficient static margin. To fix this we must make modifications that place the CG of the airplane further forward of the aerodynamic center (AC). This can be done by moving the CG forward or by moving the AC aft. If the elevator position varies stably with airspeed, a more detailed analysis will be required to see if the airplane has sufficient static margin.

It is not a good idea to try to find this “neutral point” by flight-testing at evermore aft CG locations. The airplane could become difficult and dangerous to fly, particularly if you guess wrong. Most airplanes have the most-aft allowable CG position somewhat forward of the neutral point to keep them manageable.

The safe approach is to get elevator deflection vs. trimmed airspeed data at more than one CG position, but to keep the CG in the mid-to-forward part of the CG range. Analyzing this data, we can determine the neutral point of the airplane. For each test flight, determine the position of the CG and the gross weight of the airplane, and record this along with the airspeed and control position data. After the data have been taken we must determine the lift coefficient for each airspeed point using this formula:

The dynamic pressure (Q) is a function of the true airspeed and the density of the air, which varies with altitude. Fortunately, it can also be calculated from IAS alone, because the effect of air density variation is already included in the IAS.

2 if IAS is measured in statute miles per hour.

2 if indicated airspeed is measured in knots.

Plot the data for each flight test at each CG location. The results should look something like Figure 3. For each line representing one CG position, determine the slope of the line as follows:

Once the slope of the elevator deflection vs. CL plot has been determined for more than one CG, plot the results on a graph with CG location on the X axis and slope of the elevator deflection curves on the Y axis, as shown in Figure 4. The points should fall on a straight, or nearly straight line. Extend the line until it crosses the X axis. The CG location indicated by the intersection of the line and the X axis is the CG location for neutral pitch stability, and it is called the stick-fixed neutral point (N

Several criteria are used to set the aft-CG limit of a plane, including longitudinal controllability, stall behavior and spin characteristics. All of them dictate that the airplane has a positive static margin. In other words, the most aft allowable CG position for normal operations is always forward of the neutral point. It is possible to fly the airplane with the CG further aft, but the flying qualities will be degraded, and the safety of flight reduced unacceptably. In general, it is desirable for the airplane to have about 5% static margin with the CG at the aft limit. This means the CG should always be at least 5% of the MAC ahead of the neutral point.

Once we know the position of the neutral point, we can determine the static margin (SM) for any CG position as follows:

XCG = Position of the CG.

Static margin is positive (stable) when the CG is forward of the neutral point.

Use this formula to determine the SM when the plane is loaded to its most aft CG condition. If this SM is less than 5% MAC, then the longitudinal flying qualities problem is probably due to a lack of sufficient SM. If the SM is less than 3%, it is virtually certain that the plane needs more SM to have acceptable flying qualities. If this does not prove out, we must look further.

The elevator deflection vs. airspeed data tell us the stick-fixed SM of the airplane. If it is acceptable, then the problem lies in the elevators hinge-moment characteristics. The hinge moment on a control surface is a function of several factors.

When a stable control surface is deflected, the aerodynamic force on the surface creates a moment about the hinge line that tends to drive the surface back toward its undeflected position. The restoring tendency is the amount of hinge moment per degree of deflection a control surface generates. The larger the restoring tendency the more moment, and hence stick force, it will take to deflect it from its neutral position.

The floating tendency and the restoring tendency may have a large impact on the longitudinal flying qualities of the airplane. An elevator hinge-moment problem that causes the airplane to feel pitch-sensitive could be caused by either of these factors, or a combination.

Not only is the value of each of these parameters significant, but the ratio of floating tendency to restoring tendency is also important. On an airplane with excessively light pitch-control forces but otherwise acceptable longitudinal stability, increasing the restoring tendency is usually the most useful way to attack the problem, but not always. To help sort it out, we look to the results of our last two tests, Test 4 and Test 5.

Stability and the Power Curve

The results of Test 4 should be checked before doing any stick-free stability testing in flight. If the airplane has an unstable variation of stick force with airspeed, it will certainly be unstable stick free, and stick-free testing should be avoided. A plane that has an unstable stick force velocity gradient (push when slower, pull when faster) is unacceptable and potentially dangerous, as it will tend to pitch up in slow flight and tuck under and accelerate when flying fast. At the high end of the speed scale, this is extremely hazardous, because stick forces can build rapidly with airspeed. If this occurrs in flight, extreme caution is advised. Keep the airplane trimmed, and keep the airspeed down until the problem is fixed.

Next month, we will begin a look at how to modify an airplane with each of the deficiencies to achieve acceptable flying qualities. 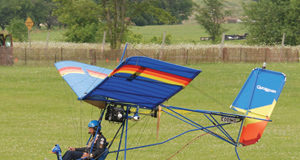